- Thrombus length not correlated with recanalization rate or clinical outcome 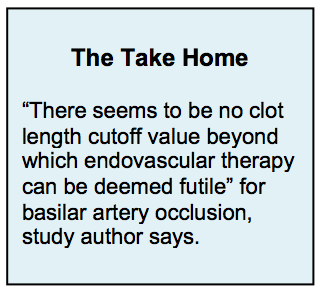 High clot burden should not deter mechanical thrombectomy for the treatment of basilar artery occlusion, according to research published online October 27, 2016, ahead of print in the Journal of NeuroInterventional Surgery.

“Two recently published studies by Weistanner et al and Seker et al demonstrated that recanalization with endovascular therapy can be achieved despite high clot burden [in middle artery occlusions],” Dr. Jensen-Kondering told Neurovascular Exchange in an email. This study aimed to determine if this was also true for occlusions that occur in the posterior circulation.

According to Dr. Jensen-Kondering, the current “study adds to the body of literature demonstrating high efficacy of endovascular therapy in the treatment of acute ischemic stroke. In contrast to intravenous thrombolysis, there seems to be no clot length cutoff value beyond which endovascular therapy can be deemed futile.”

Fatih Seker, MD, of Heidelberg University Hospital (Heidelberg, Germany) agrees with the authors’ conclusions. “This is another study confirming that modern stent-retrievers are technically effective in removing long clots unlike intravenous thrombolysis alone,” he wrote in an email to Neurovascular Exchange. “Therefore, high clot burden should not be seen as a contraindication for mechanical thrombectomy.”

Dr. Jensen-Kondering warned that his findings do not mean that intravenous thrombolysis should be withheld in the presence of high clot burden.

“On the contrary, given the poor outcome of basilar artery occlusion, this condition should be treated irrespective of clot length,” he stressed. “However, the main conclusion from this study is that clot length itself cannot be used as a discriminator between good and bad outcome or successful recanalization and that therefore other parameters such as collateral status, time from onset, etc should be investigated.”

Questions about the findings remain. Dr. Seker noted that it was surprising to find that clot density correlated with clinical outcome but not the rate of recanalization. “The implications of this finding are not clear yet and definitely need to be studied in a larger population,” he said.

“The authors also report that, contrary to anterior circulation stroke, recanalization of basilar artery occlusion does not automatically lead to a good clinical outcome,” he pointed out. “A major reason for this is probably poor collateralization of the brain stem, which leads to rapid infarction of brain tissue.”

Drs. Jensen-Kondering and Seker report no relevant conflicts of interest.