Compared with the standard unsheathing technique, a push and fluff approach to deployment results in better reperfusion outcomes with a closed-cell stent retriever in acute ischemic stroke, according to research published online September 15, 2015 in Stroke. In addition, the technique does not increase patients’ hemorrhagic risk. 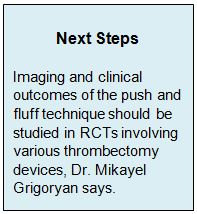 Raul G. Nogueira, MD, of Emory University School of Medicine (Atlanta, GA), and colleagues used an acute ischemic stroke thrombectomy database to identify 70 patients treated with the push and fluff technique (PFT) using the Trevo Retriever (Stryker Neurovascular, Mountain View, CA) and 81 patients treated with the center’s standard unsheathing technique using the same device between September 2010 and January 2015. Outcomes were compared between these 2 groups and with those of patients enrolled in the TREVO 2 trial.

Patients treated via the PFT technique had higher rates of first-pass reperfusion and modified treatment in cerebral ischemia-3 (mTICI-3) reperfusion when compared with those who underwent the standard unsheathing technique or were treated in the Trevo arm of the TREVO 2 trial. Hemorrhagic complications were similar across groups (table 1).

In a silicon flow model, PFT was associated with improved wall apposition (device diameter 75% larger) and cell size (mean area 51% larger), but there was also a mild degree of foreshortening (25% length reduction).

Optimizing Use of Stent Retrievers

“We have proven through several randomized trials earlier this year that thrombectomy works,” Mikayel Grigoryan, MD, of Atlanta Medical Center (Atlanta, GA), told WLNCMD in a telephone interview. “Now, it’s time to refine the techniques and see, within the thrombectomy devices, what techniques can be applied to make the procedure faster, more complete in terms of recanalization, and result in better outcomes—both imaging outcomes and clinical outcomes.”

“The technology of stent retrievers is pretty new,” he continued. “But there is inherent variability in each device. How it is deployed will theoretically provide better apposition and better retrievability of the thrombus. The ultimate goal of this technology is to have a single pass,… because the faster you retrieve the clot, the faster you recanalize the vessel, the better the outcome.”

Dr. Grigoryan described the standard Trevo technique as consisting of “just unsheathing the microcatheter and exposing the device. With that technique you certainly lay the device out where you need it, but you don’t get a very good apposition of the device or expansion of the device against the vessel wall.”

With PFT, he said, “you unsheath a little bit of the device until it is well apposed to the vessel wall, then you push the wire to tack the device against the vessel wall. Then you do the ‘fluffing’, which means together with pushing the wire you apply forward tension, and that prevents stretching of the device and compacts it against the area of the clot, providing the maximal radial force for better engagement with the clot and subsequent retrieval.” The technique is simple and easy to learn, he said, adding that videos accompanying the study provide insight into how it is performed.

In addition to weaknesses inherent to its retrospective design, the study also does not clarify the feasibility, safety, and potential benefit of PFT compared with other stent retrievers, researchers acknowledge. While the Solitaire (Medtronic, MN) stent retriever has been the most commonly used device in recent thrombectomy trials, it has a parametric design (eg, folded architecture with overlapping struts) and is not radiopaque. According to the study authors, Solitaire may not be as suitable for PFT as Trevo.

“The PFT is safe and leads to optimization of wall apposition and cell size/configuration, resulting in higher chances of first-pass reperfusion, lower number of passes, and better rates of complete reperfusion compared with the [standard unsheathing],” conclude the authors. “The feasibility of the use of this technique with other stent retrievers remains to be investigated.”

Dr. Grigoryan agreed, noting that the PFT technique should be studied with several devices in randomized clinical trials that include both imaging and clinical outcomes.