A novel metric known as early loss of immediate reperfusion (ELOIR) could provide guidance on the best duration of embedding time during mechanical thrombectomy, according to a study published online October 8, 2015, in Stroke. 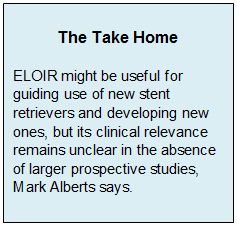 Satoshi Tateshima, MD, of Ronald Reagan UCLA Medical Center & David Geffen School of Medicine at UCLA (Los Angeles, CA), and colleagues evaluated the degrees of immediate reperfusion (IR) and ELOIR among patients who treated using a stent retriever between March 2012 and June 2014. The researchers then evaluated whether IR and ELOIR were predictive of final reperfusion and clinical outcomes.

Among 205 patients who treated for acute ischemic stroke, 56 had immediate digital subtraction angiography performed upon stent deployment to measure IR.

Mean age was 69.6 years, and 59% were female. Mean National Institutes of Health Stroke Scale score was 18. The Solitaire (Covidien) stent retriever was used in 78.6% of patients, Trevo (Stryker Neurovascular) in 14.3%, and both in 7.1%.

Final successful reperfusion (thrombolysis in cerebral infarction score of ≥2b on angiography at the end of the stent retriever procedure, before the use of any rescue therapy) and favorable outcome (modified Rankin Scale score ≤ 2) occurred at similar rates among patients who did and did not achieve IR. On the other hand, successful reperfusion was significantly more common among patients who achieved ELOIR—evaluated in 21 patients who underwent control digital subtraction angiography after 5 minutes of embedding time—than those who did not, and there was also a trend toward a better likelihood of final favorable outcomes among ELOIR patients (table 1).

According to the researchers, ELOIR could also inform the design of novel stent retrievers, although they did acknowledge that larger, prospective studies are needed to confirm their findings.

In a telephone interview with WLNCMD, Mark Alberts, MD, of the University of Texas Southwestern Medical Center (Dallas, TX), said it is difficult to ascertain the relevance of ELOIR given that it was only seen in a “subgroup of a subgroup of patients”—that is, 12 out of the original 205.

In general, he said, neurointerventionalists are still relatively inexperienced with the newest generation of stent retrievers, since they have been in wide use for less than a year. They are clearly more effective and appear to be safer the older generation devices, but their particular technical features are still being evaluated and understood, Alberts explained. This study suggests that ELOIR could be useful tool for guiding use of these stent retrievers and developing new ones, he added, but additional research is required before its role can be properly evaluated.