The Aperio stent retriever seems to be safe and effective for patients with acute stroke, a single-arm German trial suggests. The study was published online August 18, 2015, ahead of print in the Journal of Neurointerventional Surgery. 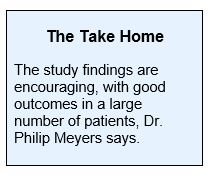 The Aperio device (Acandis; Pforzheim, Germany) is a nondetachable mechanical thrombectomy device with a hybrid cell design. Its outer diameter is 4.5 mm, with the usable length ranging from 35 to 40 mm, depending on the vessel diameter. For radio-opacity, the Aperio has two elongated wire markers to support its positioning and three distal device markers that indicate both the distal device end and the grade of expansion. In this trial, a 0.027-inch microcatheter (Neuroslider; Acandis) was used for device placement.

The trial, led by Kai Kallenberg, MD, of the Universtitätsmedizin Göttingen, (Göttingen, Germany), included 119 patients treated for acute stroke at 9 centers using the Aperio device. The median thrombus length was 15 mm (range 1.5-20 mm), and the average time from device insertion to recanalization was 30 min (range 5-120 min). The median number of deployments was 2 (range 1-6).

Blood flow restoration, defined by a Thrombolysis In Cerebral Infarction (TICI) score of 2–3, and complete clot removal were achieved in most patients (table 1). 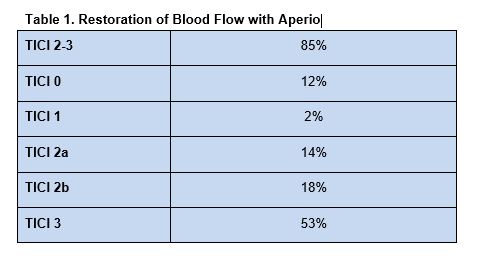 “Prospective randomized controlled trials have shown that the use of stent retrievers is safe and there is no additional risk of symptomatic intracranial hemorrhages or mortality compared with systemic [recombinant tPA], even if mechanical thrombectomy is performed in addition to pharmaceutical thrombolysis,” Dr. Kallenberg and colleagues write. “In this study we report the use of the Aperio thrombectomy device with its distal portion mainly deployed in vessels of ≤ 2 mm diameter with fewer intracranial hemorrhages than with [recombinant tPA] alone or with previous studies applying retrievable stent systems to treat acute stroke.”

In prior experimental studies, the Aperio device was found to remove blood clots as effectively as the Solitaire AB and FR (Covidien) and Revive (Codman Neuro; Raynham, MA) devices, with evidence of greater efficiency and a trend toward less distal embolization. The current study was designed to determine whether such benefits would be sustained in everyday clinical settings in different centers and in the hands of neurovascular interventionalists with varying levels of expertise.

The percentage of patients with blood flow restoration in this study was similar to that seen in trials of other retrievable stent systems, including SWIFT, SWIFT PRIME, Trevo, Trevo II, and IMS III, with figures ranging from 67% to 92%.

“However, to participate in these studies the neurointerventionalists had to fulﬁll certain qualiﬁcation criteria, whereas the experience of the physicians who used the Aperio device was quite inhomogeneous,” the authors note.

Philip M. Meyers, MD, of Columbia University Medical Center (New York, NY), told WLNCMD in a telephone interview that the study findings are encouraging, with good outcomes in a large number of patients. “There are already a number of stent-retriever and other retrieval devices on the market with stroke indications, but there’s always room for new and improved devices,” he said, “and there is a lot of development opportunity in the acute stroke market.”

Dr. Kallenberg told WLNCMD that there will not be a single device that works for every patient. “It could be possible that 1 device might be more effective than others at removing clots originating from the heart, that the location of the vessel occlusion could influence the selection, or that less experienced physicians might prefer devices with lower complication rates, accepting lower success rates,” he said. “There still is so much research to be done in the future.”