Stenting may lead to better occlusion of small unruptured intracranial aneurysms that have residual sac filling after coiling, according to a small propensity-matched analysis of retrospective, observational data. The findings were published online October 27, 2015, ahead of print in the Journal of Neurointerventional Surgery. 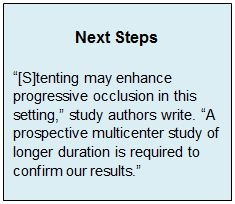 Of the lesions with residual filling, 72 were stented and 134 were not. The investigators compared rates of progressive occlusion in the stented and non-stented lesions directly and using propensity-score matched analysis.

At 6 months, 88.3% of the lesions with residual filling displayed progressive occlusion, defined as complete occlusion of the contrast-filled sac. Aneurysm size, neck size, and embolization attempt all differed between stented and non-stented lesions (P < .01 for all). However, the incidence of progressive occlusion did not differ between the groups (87.5% vs 88.8%, P = .78).

Reaching Toward Goal of Complete Occlusion

“Incompletely occluded endovascularly treated saccular aneurysms are subject to recanalization and recurrent hemorrhage over time,” the authors write. “Hence the aim of every neurointerventionalist is complete occlusion.”

Yet a recent systemic review reported an 8.8% rate of incomplete occlusion after coil embolization, they point out. To improve the situation “[s]tents have been used to increase packing density during coiling and alter hemodynamics (ie, flow diversion and endothelization of aneurysm neck).”

They conclude that “stenting may enhance progressive occlusion in this setting. A prospective multicenter study of longer duration is required to confirm our results.”