Treatment of large vertebrobasilar fusiform aneurysms (VFAs) using an endovascular approach known as parallel stent placement can improve symptoms and prevent aneurysm growth. The findings, from a small series, were published online March 26, 2016, ahead of print in the Journal of Neurosurgery.

Parallel stenting involves the placement of multiple self-expandable stents side by side (ie, parallel to each other) in vascular lesions with unruptured large VFAs. Using a microcatheter, the investigators advanced the stents over the prepositioned exchangeable guidewire and deployed them to cover the entire lesioned segment.

The diameters of the VFAs treated in this study ranged from 7.9 to 10.0 mm, and their lengths ranged from 27.5 to 54.4 mm. The number and arrangement of the stents was determined based on the location, size, and shape of each VFA. Overall, 3 patients received double or triple parallel stents, and 5 received series-connected stents, with another 1 or 2 stents deployed parallel to these devices. The 2 series-connected stents were overlapped by more than 5 mm to ensure the stability of their connection between them.

All of the 25 stents were placed successfully and without treatment-related complications. During follow-up, 5 patients had decreases in modified Rankin Scale (mRS) score, 2 had no change in functional status, and 1 had an increased mRS score due to a subarachnoid hemorrhage (SAH). Clinical symptoms were largely improved. Follow-up angiograms revealed 2 aneurysms were reduced in size, and 6 remained unchanged after stent placement. There were no episodes of in-stent stenosis, occlusion of the posterior inferior cerebellar artery, or perforators jailed by the stent (table 1). 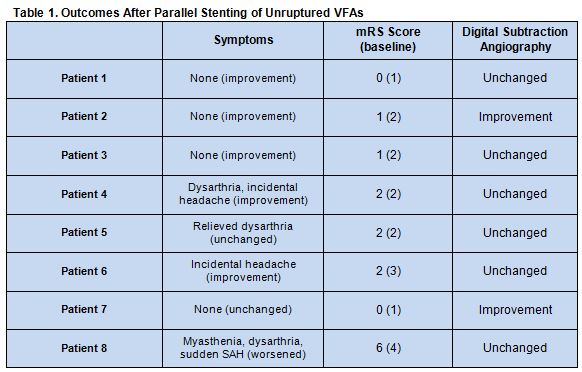 “VFAs remain one of the most formidable lesions due to their size, location, and morphology, and no firmly accepted management paradigm is currently available,” the authors write.

Parallel stenting could be a solution, the researchers say. “These results provide encouraging support for the parallel-stent placement technique, which can be envisaged as an alternative strategy against unruptured VFAs. However, testing in more patients is needed.”

There are some limitations to the technique, Li and colleagues acknowledge. “This treatment is not suitable for ruptured VFAs because the self-expandable stents are too porous to support intraluminal thrombosis and prevent bleeding. Moreover, there is a high risk of delayed stent thrombosis. The possibility of the perforators covered by the stent becoming occluded is another major concern in stent therapy, especially for the perforator-rich vertebrobasilar system.”