Stent-assisted coil embolization of the internal carotid artery (ICA) frequently results in luminal narrowing during the first few post-procedure months, according to an angiographic study published in the February 2016 issue of the Journal of Neurosurgery. This narrowing usually resolves within 2 years without additional therapy, however. 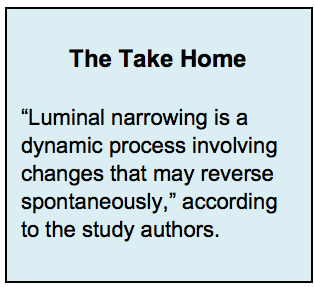 Mean diameter of the in-stent vessel measured immediately after the procedure was used as the reference diameter. After an average follow-up period of 8 months, it was reduced to an average of 82% of the immediate post-procedure diameter. After 25 months, however, it had reverted back to 91% of that diameter.

Luminal stenosis > 40% occurred in 2 of the 29 patients (7%) who experienced spontaneous reversion without additional management during follow-up. Most luminal narrowing was diffuse in nature.

According to the authors, stent-assisted coil embolization is being increasingly used because of its advantages of “larger aneurysm neck coverage, feasibility, and long-term stability.” The effects of stent-assistant coiling on luminal narrowing of the normal parent artery differ from that of standard coiling, however.

During the first few months following the intervention, “smooth muscle cells migrate from the tunica media to the tunica intima and undergo proliferation, which leads to thickening of the intima,” they explain. “Therefore, intimal hyperplasia is a main concern in the midterm phase of luminal narrowing.” Over the long-term, though, cellular infiltrates resolve and the mature intimal hyperplasia becomes largely indistinguishable from adjacent arteries that did not undergo stenting.

In this series, significant the luminal narrowing seen after midterm follow-up was largely resolved at 2 years, Baik and colleagues stress.

An important lesson for practice, the researchers say, is that “[r]outine management of patients with intimal hyperplasia does not induce adverse events that require additional treatment.”