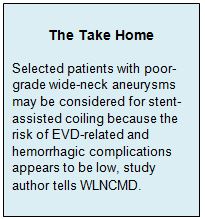 Stent-assisted coiling of poor-grade aneurysms is both feasible and safe, but the risks of hemorrhage and rebleeding require further evaluation, according to a retrospective analysis published online March 7, 2016, ahead of print in the Journal of NeuroInterventional Surgery.

Bing Zhao, MD, of the First Affiliated Hospital of Wenzhou Medical University (Wenzhou, China), and colleagues identified 131 consecutive patients enrolled in the multicenter AMPAS registry who were treated with endovascular coiling of poor-grade ruptured aneurysms within 14 days after ictus.

Rates of intraprocedural aneurysm rupture, procedure-related ischemic complications external ventricular drainage (EVD)-related hemorrhagic complications, and symptomatic vasospasm did not significantly differ between the 2 groups. Also similar between both groups were immediate angiographic results and clinical outcomes, determined using the modified Rankin Scale (mRS), at discharge and at 6 and 12 months. There was a trend toward greater risk of aneurysm rebleeding among patients who underwent stent-assisted coiling, however (table 1). 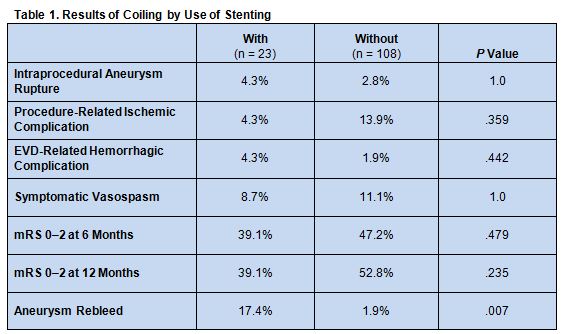 Multivariate analysis revealed that that incomplete aneurysm occlusion was independently associated with aneurysm rebleeding (adjusted OR 12.37, 95% CI 1.60 to 95.79; P = .016). It also confirmed the trend toward an increased risk of aneurysm rebleeding after stent-assisted coiling (P = .051).

In an email correspondence with WLNCMD, Dr. Zhao noted that clinical trials to date have not focused on identifying best practice for the management of poor-grade aneurysms. While endovascular coiling has become the preferred treatment, stent-assisted coiling is usually needed for poor-grade aneurysms with a wide-neck. These findings show that selected patients with such aneurysms may be considered for stent-assisted coiling because the risk of EVD-related and hemorrhagic complications appears to be low.

According to Dr. Zhao, outcomes can be optimized with appropriate patient selection. “Patients without severe intraventricular hemorrhage, cerebral hematoma, or hydrocephalus would benefit from stent-assisted coiling because these patients do not often require decompressive craniectomy or a [ventriculoperitoneal (VP)] shunt,” he noted.

In addition, “ruptured aneurysms [should] be as completely occluded as possible to reduce the risk of rebleeding,” he recommended. And, “the risk of hemorrhagic complications should be considered in patients requiring EVD or VP shunt during hospitalization.”

The next step in research, Dr. Zhao said, is to evaluate the safety of using dual antiplatelet therapy among patients with poor-grade aneurysms undergoing stent-assisted coiling. Additional important questions include determining the optimal time of EVD in these patients and looking at whether some may fare better with balloon-assisted rather than stent-assisted coiling.