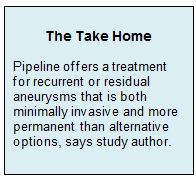 The Pipeline flow diverter can be used to safely and permanently repair recurrent or residual intracranial aneurysms, new research shows, whether ruptured or not and regardless of how the aneurysms were treated initially. Results of the single-center study were published online November 25, 2016, in the Journal of NeuroInterventional Medicine.

Senior author Ajit S. Puri, MD, of the University of Massachusetts (Worcester, MA), and colleagues are keen to learn whether other centers are experiencing similar success.

These repairs typically represented an off-label use of Pipeline, Dr. Puri explained in an interview with NVX, since the aneurysms did not always match current US Food and Drug Adminsitration-stipulated size and location parameters for this device.

There were no changes in preprocedure mRS score at discharge or at any scheduled follow-up. Almost all patients assessed at 6 and 12 months had complete or near complete occlusion of their aneurysm on follow-up. Only 1 patient (with an unruptured aneursym) had a partial occlusion (table 1).

One case of moderate intimal hyperplasia was observed at 6 months, but this decreased to mild at the 12-month follow-up. The Pipeline device appeared to be similarly effective in both ruptured and unruptured aneurysms.

A Potential New Standard of Care

Dr. Puri explained that the study findings reflect what they have been seeing in clinical practice, with complete or near-complete occlusion rates consistently surpassing 90% at 6 months. What’s surprising is that no one else has yet suggested Pipeline for this indication, he said. “We felt that it was a very elegant and novel method.”

Before Pipeline, recurrent and residual aneurysms would have been treated with yet more clipping and coiling. In addition to being a minimally invasive option, Pipeline repair is “more permanent,” said Dr. Puri. “It has been shown in follow-up of the PUFS trial that aneurysms once treated by this device are never coming back. And that’s what we see in our practice. We have never seen an aneurysm treated with this device coming back.”

Dr. Puri is eager to see results from other centers using the Pipeline in a similar manner. If larger, multicenter studies with longer follow-up demonstrate comparable outcomes, it would provide the evidence needed to make this approach part of standard practice.