Early angiographic signs of thrombus formation following use of the Pipeline device for intracranial aneurysms can help alert operators to the need for intervention, according to research published online Oct 21, 2016, ahead of print in the Journal of NeuroInterventional Surgery. 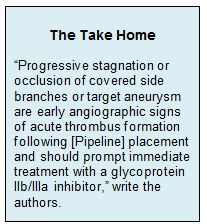 Timothy R Miller, MD, of the University of Maryland Medical Center (Baltimore, MD), and colleagues searched their prospectively maintained institutional database to identify all 5 cases of acute thrombosis that occurred after placement of the Pipeline device (Covidien) in 100 consecutive procedures.

In the 5 cases, early angiographic signs of thrombosis were present: progressive stagnation of blood flow in covered side branches, occlusion of covered side branches, excessive stagnation of blood flow in the target aneurysm, and occlusion of the target aneurysm. All of the patients were treated with abciximab, which resolved the sequelae, leaving no permanent neurological morbidity or mortality.

Four of the 5 patients had a preprocedure P2Y12 reaction unit value above 200 (range 201-227), as measured by the VerifyNow assay (Accumetrics).

“Abciximab treatment was then considered if there was any evidence of acute thrombus formation in the [Pipeline],” they note. “In cases where abciximab was administered, serial angiograms were performed every 10 minutes until there was resolution of thrombus.

The investigators report that as their experience with Pipeline grew, they “began performing a second DSA run in the parent vessel approximately 10 minutes after flow diverter placement. Thischange in practice occurred as we began to increasingly recognize early angiographic signs of acute in-device thrombosis on delayed angiography runs.”

According to Alexander L. Coon, MD, of Johns Hopkins University School of Medicine (Baltimore, MD), this study “highlights something that neurointerventionalists have to be continuously aware of and brings into focus that it is eminently treatable if identified properly.”

“Any time a stent is placed anywhere in the body, the risk of a clot or thrombus formation within it exists,” he told Neurovascular Exchange, adding, ”There is a tremendous amoung of understanding that has developed in recent years about how to prevent it and manage it, such that the chances of having an in-stent thrombus with a Pipeline procedure has gotten much lower.”

Dr. Coon explained that the key to avoiding thrombus formation when using Pipeline is proper placement. “If you don’t perfectly place a Pipeline and get it opened,” he said, “the chances of having a thrombus form there is much, much higher. [With new] iterations in the device and access catheter technology, we have been able to do it safely, reliably, quickly, and efficiently, so those numbers have gone way down. At Johns Hopkins, where we do more Pipelines than anywhere in North America by far, we quote patients a risk of about 3%.”

Should the complication still occur, this study “illustrate[s] the importance of recognition of early angiographic signs of acute in-device thrombus formation,” write the authors.

“Once identified, the prompt administration of a glycoprotein IIb/IIIa inhibitor such as abciximab can prevent resulting serious thromboembolic sequelae,” they advise. “Platelet inhibition testing may help decrease the risk for serious thromboembolic complications, . . . but a value in the target range does not preclude the development of acute in-device thrombosis.”

- Dr. Coon reports being proctor for all 3 flow diverters available in the United States, including Pipeline, SILK, and Surpass.