- Number of dAVFs treated endovascularly has doubled, outcomes have improved 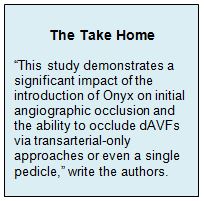 Introduction of Onyx, a nonadhesive liquid embolic agent, a decade ago increased the number of dural arteriovenous fistulas (dAVFs) treated endovascularly and is associated with improved outcomes, according to a single-center retrospective analysis published online September 2, 2016, ahead of print in the Journal of Neurosurgery.

For the study, Felipe C. Albuquerque, MD, of St. Joseph’s Hospital and Medical Center (Phoenix, AZ), and colleagues identified 251 patients with 260 distinct dAVFs from their database who were treated initially endovascularly between January 1996 and September 2015.

From 1996 to 2006, prior to the introduction of Onyx (Covidien), 87 dAVFs were treated at the center. Twice as many dAVFs were treated in the following decade, after Onyx was available. Comparing these two periods revealed significant improvements in rates of initial angiographic occlusion dAVFs obliterated via a transarterial-only approach or via a single arterial pedicle (table 1).

“This study demonstrates a significant impact of the introduction of Onyx on initial angiographic occlusion and the ability to occlude dAVFs via transarterial-only approaches or even a single pedicle,” write the authors.

Despite the study’s limitations as a retrospective analysis from a single center without independent outcome adjudication, the authors report that these findings of “an overall rate of approximately 80% for initial angiographic occlusion in the Onyx era, and an approximately 80% rate of meaningful clinical improvement in tinnitus and/or ocular symptoms after treatment” can be used to counsel patients who are considering an endovascular intervention.

“Initial angiographic results should be evaluated with careful scrutiny for effective casting of the draining vein, and delayed follow-up complete angiography must be performed to confirm a true durable angiographic ‘cure’ for high-risk lesions,” recommend the authors. “With more stringent criteria for the declaration of initial angiographic occlusion and subsequent angiographic cure, recurrence after dAVF treatment is rare.”