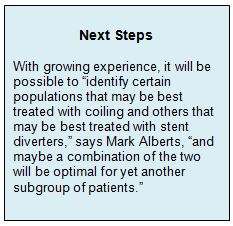 The Pipeline flow diverter device appears to be as safe and effective for treatment of small-to-medium sized wide-neck aneurysms as it is for large aneurysms, according to the results of a multicenter European trial presented last week at the 2017 International Stroke Conference (ISC) in Houston, TX.

Despite it being US Food and Drug Administration approved only for use in aneurysms larger than 10 mm in a specific location on the carotid artery, the Pipeline is widely used in the United States outside those indications, said lead author Ricardo A. Hanel, MD, PhD, of Baptist Health System (Jacksonville, FL), during a press conference. “We have never had, up to this point, a prospective, independently adjudicated study showing the efficacy and safety of this tool when used on aneurysms that are under 12 mm in the whole carotid artery and on the proximal part of the vertebral artery.”

To remedy this, Dr. Hanel and colleagues representing the PREMIER investigators treated and followed 141 patients with unruptured, small-to-medium-sized wide-neck intracranial aneurysms using the Pipeline device (Medtronic). Patients’ mean age was 54.6 ± 11.3, and 87.9% were female. They were treated at one of 22 participating centers in the US and Canada between July 2014 and November 2015.

All eligible aneurysms measured ≤ 12 mm, with a neck ≥ 4 mm or a dome-to-neck ratio ≤ 1.5, as part of the study design. Axial diameter of the treated aneurysms was 5.0 ± 1.9 mm (range 1.7 mm-11.1 mm), and 84.4% were smaller than 7 mm. All aneurysms were located in the internal carotid artery up to the carotid terminus or in the vertebral artery segment, up to and including the posterior inferior cerebellar artery.

The primary effectiveness endpoint was complete aneurysm occlusion and absence of significant parent artery stenosis at 1 year. The primary safety endpoint was occurrence of major stroke in the territory supplied by the treated artery or neurological death at 1 year.

The 1-year complete occlusion rate, documented by angiogram and confirmed by an independently adjudicated lab, was 83.5%. Treatment of the remaining aneurysms was considered a failure due to the presence of a residual aneurysm (n = 11), residual neck (n = 8), stenosis > 50% (n = 2), or the need for retreatment of the aneurysm (n = 3).

Overall, only 3 patients experienced a major stroke in a territory supplied by the treated artery or died from neurological causes up to 1 year posttreatment (table 1).

Patients will continue to be followed through 3 years posttreatment.

“In essence,” said Dr. Hanel, “we had a very high rate of occlusion of the aneurysms with no intraoperative aneurysm ruptures, no delayed aneurysm rupture, not a single event in terms of bleeding of the aneurysm in the first year analysis and a retreatment rate of 2.2%. . . . This, I think, demonstrates that the Pipeline embolization device is a safe and effective way to treat patients representing this cohort.”

In an interview with Neurovascular Exchange, Mark Alberts, MD, of Hartford Healthcare (Hartford CT) and spokesperson for the American Stroke Association, described flow diverters such as the Pipeline as “novel, unique, and with considerable potential.” Their primary benefit is that, in eligible aneurysms, they provide the option of minimally invasive treatment with a low recurrence rate.

The PREMIER trial is part of ongoing research helping to identify which aneurysms are most amenable to flow diversion. “As folks gain more experience with this,” said Dr. Alberts, “they will identify certain populations that may be best treated with coiling and others that may be best treated with stent diverters, and maybe a combination of the two will be optimal for yet another subgroup of patients.”

A crucial component, he said, will be good training. “We’re steep on the learning curve because this is a new treatment paradigm,” Dr. Alberts observed. “As the various interventionalists and neurosurgeons explore this more, they are going to have to be trained. As we learned with stroke, the more patients who get treated, typically, the better the outcomes, as folks gain more experience with these devices and techniques.”