Irregular shape is a significant risk factor for rupture of saccular intracranial aneurysms independent of location and patient characteristics. Importantly, even small aneurysms may have a considerable risk of rupture if they are irregular in shape, according to a registry study published in the May 2016 issue of Stroke. 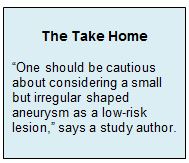 Juhana Frösen, MD, PhD, and colleagues at Kuopio University Hospital (Kuopio. Finland) obtained data from a population-based registry of 4,417 patients treated for 6,327 saccular intracranial aneurysms at their neurosurgical center between 1980 and 2014. After some patients were excluded from the study due to incomplete information, the final population consisted of 3,030 unruptured and 2,784 ruptured aneurysms in 4,074 patients.

“Irregular shape has been associated with aneurysm rupture before, and even previously shown to be a risk factor rupture,” Dr. Frösen told WLNCMD in an email.

“The novelty of this large population-based series with a 35-year follow-up is that it demonstrates that irregular shape is a very sensitive, independent marker for those aneurysms that will rupture,” he said. That shape also indicates rupture risk even in smaller aneurysms “is very important,” Dr. Frösen stressed, “since although overall small (< 7 mm) aneurysms have a low or very low rupture-risk, some of them will nevertheless rupture.”

“One should be cautious about considering a small but irregular shaped aneurysm as a low-risk lesion,” he cautioned. “However, one should also remember that we do not yet know how specific irregular shape is as a marker of rupture risk,” especially when it pertains to small aneurysms.