Permanent stenting appears to be a safe and effective rescue treatment following failed stent retriever thrombectomy for acute anterior circulation large artery occlusion, according to a retrospective analysis published online July 21, 2016, ahead of print in Stroke. 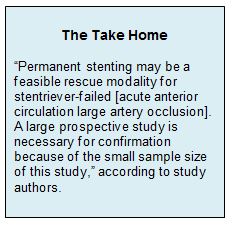 “Permanent self-expanding stent placement has been suggested as an another primary approach or as a rescue tool for recanalization of acute intracranial [large arterial occlusion],” they write.”We hypothesized that permanent self-expanding stent placement may be a rescue treatment for [acute anterior circulation large artery occlusion] refractory to stentriever thrombectomy.”

This is the first study to compare outcomes with versus without stenting in cases where stent retriever thrombectomy failed to prodce full recanalization, they write.

The investigators retrospectively evaluated 208 patients treated with a Solitaire FR/AB device (Covidien/ev3, now Medtronic) for anterior circulation large artery occlusion between September 2010 and September 2015. Of these patients, 155 (74.5%) achieved full recanalization, defined as a modified TICI 2b-3, with thrombectomy alone, and another 8 (3.8%) required urokinase or glycoprotein IIb/IIIa inhibitor infusion. Of the remaining 45 patients (21.6%), 17 underwent stenting and 28 did not.

Patients who did and did not undergo stenting following failed thrombectomy were similar with regard to clinical and laboratory findings, initial NIHSS score, location of anterior circulation large artery occlusion, and onset-to-puncture time.

Overall, a modified TICI 2b-3 was achieved in 14 of patients (83.3%) who underwent stenting. The stented patients were more likely to acheieve a favorable outcome, defined as an mRS 0-2, and less likely to experience cerebral herniation than nonstented patients. Symptomatic intracranial hemorrhage (ICH) and mortality rates did not differ between the two groups (table 1).

Permanent stenting following failed stent retriever thrombectomy is an unusual intervention and generally considered a treatment of last resort, Charles Prestigiacomo, MD, of Rutgers New Jersey Medical School (Newark, NJ) and president of the Society of NeuroInterventional Surgery (SNIS), told Neurovascular Exchange in a telephone interview. In fact, it was the poor outcomes of permanent stenting for anterior circulation large artery occlusion that led to the development of the currently used stent retrievers. “The idea of going back to what we first looked at as a form of rescue is very appropriate in the sense that it’s a line of last resort,” he said. “It’s done when all else fails, and actually the data are pretty positive.”

One worry about permanent stenting is that antiplatelet therapy might raise the risk of ICH, the authors note. “In this study, all patients except one received glycoprotein IIb/ IIIa inhibitor during the procedure for resolution or prevention of acute in-stent thrombosis, and dual antiplatelet medication was subsequently maintained for at least 3 months.” But the rate of symptomatic ICH seen here was within range of previous studies, they say, and the rate of cerebral herniation caused by malignant edema or ICH was significantly lower (11.8%) compared with previous studies.

Prestigiacomo concurred with the authors that the main risk of permanent stenting is ICH. But this must be weighed against the risk of leaving the vessel closed, if mechanical thrombectomy has failed, he said. If a large territory is affected by the occlusion, the consequences of leaving it untouched can be severe. As with any risky intervention, clinicians must make a careful risk/benefit assessment when deciding which patients to treat.

“Permanent stenting may be a feasible rescue modality for stentriever-failed [acute anterior circulation large artery occlusion],” write the authors. “A large prospective study is necessary for confirmation because of the small sample size of this study.”

Given that the number of eligible patients is low and the risks of permanent stenting are high, Prestigiacomo said he believes a multicenter registry study would be a more appropriate first step.

- Dr. Prestigiacomo reports being on the advisory board for Stryker and medical director for patient safety at the SNIS.