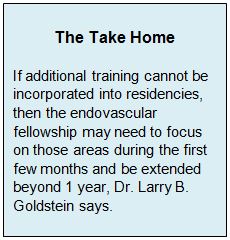 Students who graduate from neurosurgical residency programs in the United States frequently lack core competencies in the endovascular arena that they should have mastered before entering into neuroendovascular fellowship programs. The finding, from a survey of fellowship directors, was published online December 7, 2015, ahead of print in the Journal of Neurosurgery.

Pascal Jabbour, MD, of Thomas Jefferson University and Jefferson Hospital for Neuroscience (Philadelphia, PA), contacted all 32 directors or faculty of neuroendovascular fellowship programs involved in the training of US neurosurgery graduates. The survey included questions about the competence of trainees with regard to professionalism, independent/graduated practice, and research/academic ability.

Overall, 25 of 32 (78%) of program directors who were sent the survey responded. Their responses indicated significant gaps with respect to core competencies (table 1).

In general, respondents reported that fellows demonstrated professionalism and interest in research and had good communication and clinical skills.

‘Treat the Disease Regardless of the Tools’

Dr. Jabbour told WLNCMD in a telephone interview that the Accreditation Council for Graduate Medical Education now requires “neurovascular residents to be familiar with endovascular techniques. That used to be optional.”

Despite having “one of the most competitive neurovascular fellowships in the country,” he said, his center “started seeing that fellows coming to be trained are really lacking a lot of skills…. So, we wanted to show everyone that the neurosurgery programs are not doing a good job of introducing those techniques early on for neurosurgery residents.”

Skills are lacking because until about 10 to 15 years ago, neurosurgery residencies only included training in open procedures, with endovascular cases being performed by interventional radiologists. But times are changing, and the residency programs have not kept up, he asserted. “Neurosurgeons [today] should be able to treat the disease regardless of the tools.”

The question then, is what to do about core competency gaps. Should additional skills training be incorporated into neurosurgical residency programs or into fellowship programs?

According to Larry B. Goldstein, MD, of the Kentucky Neuroscience Institute at the University of Kentucky (Lexington, KY), neurosurgical training already requires extensive demands on time to learn the large variety of different procedures needed to be competent for general neurosurgery. If additional training cannot be incorporated into residencies, then the endovascular fellowship may need to focus on those areas during the first few months and its overall length be extended beyond 1 year, he told WLNCMD in a phone interview.

Unfortunately, “there is no shortcut [to skills acquisition]. It just takes a lot of time,” Dr. Goldstein said. “As the therapeutics become more complicated, the cognitive training involved is also very important.” Beyond technical skills, clinicians must know how to provide care before and after the procedure and function as part of a team, he added. It is unclear exactly how much experience is enough.

With the enforcement of the 80-hour workweek, Dr. Jabbour said, it is time to consider lengthening the 7-year neurosurgery residency. The problem will only increase as techniques and tools become increasingly complex, he noted, predicting that, in response, “people are going to be more and more subspecialized” rather than being general neurosurgeons.

Whether COVID-19 adds risk by virtue of being a comorbidity or due to direct effects is unknown. A...