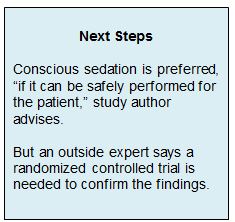 Patients treated with mechanical thrombectomy for acute ischemic stroke have a lower risk of death and a shorter hospital stay, on average, when the procedure is undertaken using conscious sedation rather than general anesthesia.

The findings, from a study that employed advanced statistical methods to account for possible confounders, was published online January 9, 2017, ahead of print in Stroke.

General anesthesia was associated with both a higher mortality rate and a substantially longer hospital stay than conscious sedation (table 1).

The investigators calculated that 15 patients would need to be treated with conscious sedation to prevent 1 death.

To NVX, Dr. Bekelis explained how they controlled for confounders in order to isolate the true effects of anesthesia.

“First, we created a cohort of all patients in a major state, giving a true picture of practice in the community,” he said. “Second, we used advanced observational techniques to control for confounding. Propensity-score stratification was used to adjust our analyses for known confounders. The possibility of clustering, which can bias the results of multicenter national studies, was accounted for by using mixed-effects methods. Most importantly, an instrumental variable analysis was used to control for unmeasured confounders (mainly the a priori selection of anesthesia technique) and simulate the effects of randomization.”

Dr. Bekelis pointed out that while previous observational studies on the same topic have shown mixed results, they failed to account for unmeasured confounders the way this study did. “Patients included in prior retrospective studies have been selected for either anesthesia technique in advance,” he said. “This selection reflects the different preferences and background of the treating physicians, as well as specific patient characteristics. Administrative databases lack such granularity, limiting the ability to control for these confounders.

Dr. Bekelis also advocated for research into why conscious sedation offers better outcomes, suggesting it may relate to “the neurotoxicity of certain anesthetic agents, the lack of continuous neurological assessment during general anesthesia, and perioperative hypotension.”

But Deepak Sharma, MD, of the University of Washington (Seattle, WA), pointed out several limitations of the study that suggest it should be interpreted with caution.

“The study did not demonstrate either causation or a possible causal mechanism,” he told NVX. “In fact, general anesthesia was not associated with higher rates of postprocedure pneumonia or hemorrhagic conversion.” He also noted that the study did not address important details of anesthesia, such as the individual drugs used, hemodynamic and ventilation parameters, or glycemic control. Nor did it report on preprocedure NIHSS or other important known determinants of outcome, such as reperfusion rates, repercussion scores, time to reperfusion, types of endovascular devices used, or providers of care. In addition, he said, “the definition of general anesthesia used in somewhat arbitrary (ie, intubation = general anesthesia).”

Dr. Sharma recommended that “prospective, randomized studies [be used] to confirm the findings, and more importantly, the mechanism of the association of anesthetic technique with stroke outcomes.” The SIESTA trial did not reveal any differences in neurological outcomes based on anesthesia technique, he noted, and three other randomized trials are currently ongoing. He also highlighted the importance of tailoring anesthesia selection to individual patient needs and characteristics.

Drs. Bekelis and Sharma report no relevant conflicts of interest.