BRAT at 6 Years: No Clear Winner Between Surgical, Endovascular Treatment of Ruptured Aneurysm

Long-term follow-up from the Barrow Ruptured Aneurysm Trial (BRAT) suggests that patients with anterior circulation aneurysms have equal likelihood of disability at 6 years whether they were treated using coil embolization or surgical clipping, reports a paper published online June 26, 2015, ahead of print in the Journal of Neurosurgery. However, those with aneurysms arising in the posterior circulation did much better after coiling. 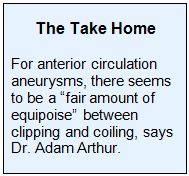 The findings were previously presented at the 2014 American Association of Neurological Surgeons Annual Scientific Meeting in San Francisco, CA.

For the study, Robert F. Spetzler, MD, of St. Joseph’s Hospital and Medical Center (Phoenix, AZ), and colleagues randomized 471 patients with subarachnoid hemorrhage to receive either surgical clipping (n = 238) or endovascular coiling (n = 233). After excluding 6 patients who died before treatment and 57 whose hemorrhage did not arise from a ruptured aneurysm, the main study cohort included 408 patients.

Six-year follow-up data were available for 82% of the 408-patient cohort.

Much like at 3 years, when findings were analyzed according to intent to treat, there was no statistically significant difference at 6 years in the primary endpoint of poor outcome (defined as modified Rankin Scale [mRS] score > 2) between the 2 groups. Complete aneurysm obliteration was more common with clipping than with coiling. The need for at least 1 retreatment during 6-year follow-up was increased for patients assigned to coiling (table 1). No subarachnoid hemorrhages occurred between hospital discharge and 6 years in either treatment arm.

Following the 2002 publication of results from the International Subarachnoid Aneurysm Trial (ISAT), “endovascular treatment has become the mainstay in many centers, especially in Europe,” Dr. Spetzler and colleagues report. While coil embolization was superior to clip occlusion at 1 year in that trial, it had enrolled primarily patients who were in good clinical condition and had small, anterior circulation aneurysms, they point out. Thus, BRAT was conducted to evaluate whether the superiority of coiling held true in a wider patient population.

BRAT has drawbacks, the investigators acknowledge, including a lack of statistical power and frequent crossover between treatment groups, both of which would blunt the ability to detect differences.

“Recognizing the limitations of this study, and in contrast to ISAT, we note that there appeared to be only a marginal difference in outcome between clipping and coiling for treating anterior circulation aneurysms as observed over a 6-year period,” they conclude. “This was not the case for aneurysms in the posterior circulation, where there appeared to be a sustained benefit of coil embolization over surgical clipping.”

There are enough remaining questions about the 2 treatments “to warrant further well-designed randomized trials,” the researchers say.

In an email to WLNCMD, Dr. Spetzler agreed that the current findings provide support for both options. “Clipping is a very good treatment, especially for anterior circulating aneurysms,” he advised.

Importantly, the results should not be interpreted to mean that clipping should be avoided entirely in posterior circulation aneurysms, he stressed. “[The] numbers are too small to make meaningful conclusions.”

Adam S. Arthur, MD MPH, of Semmes-Murphey Neurologic and Spine Institute and the University of Tennessee Health Science Center (Memphis, TN), told WLNCMD in a telephone interview that the 6-year BRAT data are not surprising. The “clear superiority” of endovascular treatment for posterior circulation aneurysms “has already been integrated into practice at most centers,” he explained. “If there is any surprise…, it is that there seems to be a fair amount of equipoise in the treatment of anterior circulation aneurysms.”

As to what patterns might emerge from BRAT between 6 and 10 years, Dr. Spetzler predicted that there might be a difference in recurrent hemorrhage between the coiling and clipping groups.

This concern can be addressed by monitoring patients at risk for recurrence, Dr. Arthur noted. Patients who undergo endovascular treatment but whose aneurysms are not completely treated need to be more closely followed than those whose aneurysms are completely obliterated, whether by clipping or coiling, he advised.

Endovascular treatment—the devices and the imaging technology—is advancing at a faster rate than surgery, Dr. Arthur reported. “So I expect that over time, more aneurysms will be treated with endovascular means. But what’s difficult there is that there are certainly some aneurysms that will still need open surgery.”

Although practice patterns vary, Dr. Arthur said, at his own center open surgery is most often done for “small ruptured aneurysms in young patients.”

The findings “reinforce that this is absolutely the right thing to do and that we need to set up...

Whether COVID-19 adds risk by virtue of being a comorbidity or due to direct effects is unknown. A...