Both carotid artery stenting (CAS) and endarterectomy (CEA) can be performed safely in patients who recently developed symptomatic stenosis, according to 2 recent studies. 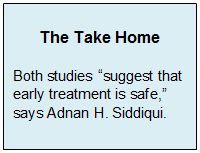 In a meta-analysis published online October 15, 2015, investigators led by Paola De Rango, MD, of Hospital S. Maria Misericordia (Perugia, Italy) analyzed data from 47 studies published in the previous 8 years that reported rates of periprocedural stroke and death following CEA (35 studies), CAS (7 studies), or both (5 studies) while exploring how this risk related to the time between qualifying neurological symptoms and performance of the intervention.

There was no increased risk of stroke or stroke/death with earlier revascularization at 0-7 days or within 15 days (table 1).

In “hyperacute surgery” performed at less than 48 hours, periprocedural stroke risk was 5.3% overall after CEA. Risk was increased in patients whose index event was stroke (8.0%) as compared to transient ischemic attack (2.7%). For patients stented within 48 hours, periprocedural stroke risk was 2.1% overall, with higher risks seen in patients treated for stroke compared with transient ischemic attack (7.9% vs 2.1%).

“These data may have important implications for the acute phase management of patients in today’s TIA clinics,” De Rango and colleagues write. “Early carotid revascularization (< 48 hours after symptoms) may be associated with increased periprocedural stroke risks, especially in patients with stroke as index event…. However, there are insufficient data on the natural history and the clinical instability of this subgroup of patients to assess the benefits and risk exposure of delaying treatment.

“Current data suggest that carotid revascularization can be safely performed within the first week (0–7 days) from symptom onset to prevent the peak of early recurrence without intervention,” they conclude.

In the second study, an analysis of CREST data published online October 22, James F. Meschia, MD, of the Mayo Clinic (Jacksonville, FL), and colleagues examined whether differences in time between symptom onset and revascularization were associated with disparities in the combined risk of periprocedural stroke or death among symptomatic patients.

The investigators grouped 1,180 patients who received their assigned procedure and had clearly defined timing of symptoms based on whether they received their intervention at < 15 days, 15-60 days, or > 60 days after the symptom onset.

Table 2. Risk of Stroke/Death by Timing of Revascularization vs < 15 Days

“Because patients were not randomized to early versus delayed surgery, it is not possible to conclude definitively that timing of revascularization had no effect on risk,” Meschia and colleagues note, adding, “However, given the current recommendations to revascularize early, intentionally delaying treatment would not be ethical. Furthermore, by not having a treatment group managed purely medically, we cannot conclude that delayed surgery is appropriate simply because it seems to carry no greater risk of complications. Early treatment should be the goal because it ought to lead to less time at risk of artery-to-artery embolism.”

According to Adnan H. Siddiqui, MD, PhD, of the University at Buffalo (Buffalo, NY), earlier is indeed better.

“Whether it’s the unified cohort from CREST or the meta-analysis, both [studies] suggest that early treatment is safe,” he told WLNCMD in a telephone interview. “That is completely consistent with what has been suggested before with NASCET and other studies: for symptomatic disease, you should ideally treat within the first couple of weeks to get maximum benefit.”

As to whether there might be such a thing as “too early,” Siddiqui said that CEA “might be a little higher risk in the first couple of days compared to angioplasty and stenting.”

This is because surgery “typically requires the flow to be halted, and in the acute peristroke period there may be potentially salvageable penumbra that may be adversely affected by that,” he explained. “That 48-hour period is not quite as risky for stenting. But there are a lot of different strategies that have continued to evolve, most recently with proximal protection or covered stenting, which may make stenting the same or even lower risk than endarterectomy.”