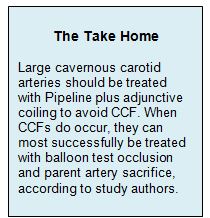 Carotid cavernous fistula (CCF) is a rare but difficult to treat complication that can occur after the use of Pipeline to treat cavernous carotid anuerysm. In a high volume, single-center case series published online September 5, 2016, ahead of print in the Journal of NeuroInterventional Surgery, experts evaluated the how often CCF occurs, which factors contribute to its development, and how best to treat them.

Jonathan A Grossberg, MD, of Emory University School of Medicine (Atlanta, GA) and colleagues reviewed their center’s database of all patients whose aneurysms were treated using the Pipeline device (Covidien) since its approval by the US Food and Drug Administration in 2011.

Based on final imaging by MR angiography or digital subtraction angiography at 14.1 ± 12.2 months, 5 patients (11.4%) developed CCFs in the postprocedural period after Pipeline placement. All occurred within 2 weeks of the procedure. CCFs were treated with a balloon test occlusion followed by parent artery sacrifice.

A literature review of all papers describing Pipeline treatment of cavernous carotid aneurysms yielded only 3 reports of CCFs occurring after placement the device, the researchers reported. The largest series had a CCF rate of only 2.3%.

“The rate of CCF was surprising for our group, Dr. Grossberg told Neurovascular Exchange in an email. “Neurointerventionalists are aware of the risk, but probably not at the rate which our study found.”

Treatment of CCFs that occur following Pipeline placement for cavernous carotid aneurysms represent a unique challenge, according to the study authors. “The transarterial route to treat these fistulas is not a viable option if the goal is to maintain (internal carotid artery [ICA]) patency, given the presence of the [device] in the cavernous carotid segment,” they write. “The only arterial treatment option is vessel sacrifice of the ICA.”

Dr. Grossberg said that all CCFs in the series were treated with carotid sacrifice after balloon test occlusion. “There is also a transvenous option described elsewhere,” he added, but his team was not successful when attempting this approach in two patients. As a result, balloon test occlusion followed by parent artery sacrifics has become the primary approach to management of CCFs in their center.

Given the difficulty in treating CCFs, the authors have developed techniques aimed at avoiding them outright. “Coiling in addition to placing a pipeline has the potential for decreasing the rate similarly to how the rate of intracranial rupture post-Pipeline can be reduced in large aneurysms with coiling,” said Dr. Grossberg. “The IntrePED [database analysis] also suggests a decreased risk of rupture with coiling.”

In their paper, the authors note that, “as a general principle,” they “attempt to obtain coil packing density of one-third to one-half the amount typically achieved for complete embolization of an aneurysm treated without flow diversion, in order to embolize the aneurysm without adding to the mass effect of the aneurysm, which is often causing neurologic symptoms.”