Hypertension, impaired vasoreactivity, and angioplasty without the use of stents all portend higher risk of restenosis after angioplasty for carotid artery stenosis. Restenosis, in turn, can predict the occurrence of ipsilateral stroke. The authors of the study, published online June 21, 2016, ahead of print in Stroke, say these findings might help identify patients who are at high risk and thus in need of more careful follow-up. 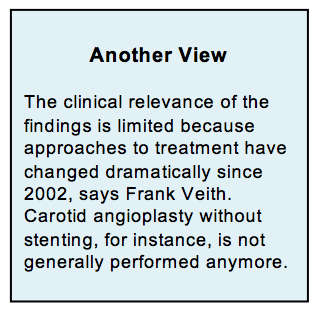 Patients were followed-up with respect to restenosis (ultrasound evidence of ≥ 70% narrowing of a previously treated vessel), ipsilateral stroke, and death.

Overall, 97 (9.2%) patients experienced restenosis during a median follow-up period of 12 months (range 9 -32 months). Age older than 70 years (P = .003) and history of hypertension (P = .002) were the only vascular risk factors significantly related to higher rates of restenosis during follow-up.

Hypertension, preprocedural impaired vasoreactivity, and angioplasty without stenting were all independent risk predictors of ≥ 70% restenosis (table 1).

“Globally, our results pointed out to a high-risk subgroup, which might benefit from a closer follow-up with carotid imaging,” the investigators write, adding, “Based on our data, cerebral vasoreactivity emerges as a new ultrasonographic marker of the endothelial dysfunction, which predisposes restenosis.”

But Frank J. Veith, MD, of NYU Langone Medical Center (New York, NY) and the Cleveland Clinic (Cleveland, OH) told Neurovascular Exchange that the clinical relevance of the findings is limited because approaches to treatment have changed dramatically since 2002. Carotid angioplasty without stenting, for instance, is not generally performed anymore.

The authors defend their choice to include patients who underwent angioplasty without stenting, however, noting that “some procedures involve technical difficulties that prevent stent use.”

In addition, they say, the inclusion of not only angioplasty without stenting but also procedures to treat restenosis “could explain, at least in part, the higher rate of restenosis detected compared with the CREST study. Nevertheless, stent use results in a more effective long-term restenosis prevention technique.”

Dr. Veith also pointed out that the analysis included patients with either symptomatic or asymptomatic carotid artery stenosis. He said he believes the vast majority of asymptomatic patients are often better served with medical therapy alone.

Drs. Moniche and Veith report no relevant conflicts of interest.