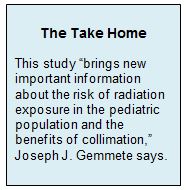 A new study on the effects of radiation in children treated for intracranial vascular malformations has shown that collimation may be able to reduce the likelihood that these patients will go on to develop a tumor. Certain technical and operator-related factors can also help decrease patient exposure at no cost to image quality, researchers report in their paper published online September 5, 2016, in the Journal of NeuroInterventional Surgery.

Karen Chen, MD, of the Mount Sinai Health System (New York, NY), and colleagues calculated radiation exposure from neuroendovascular procedures among 215 patients aged 0 to 21 and converted it to brain doses using modeled data. Next, they extrapolated this information to risk ratios for tumor development using results from population-based estimates found in the literature.

The highest lifetime and per procedure risks were seen in patients with brain arteriovenous malformations, brain arteriovenous fistulas, and vein of Galen malformations, which the authors attribute to referral patterns at their institution. Across all pathologies, both per procedure and lifetime excessive risk decreased dramatically with the use of collimation (table 1).

In an email interview with Neurovascular Exchange, Dr. Chen explained that concerns about radiation dose are often eclipsed by the acuity of the diseases that typically lead pediatric patients to require neuroendovascular interventions. “In other situations, lesions are found incidentally, or they are stable and just need to be followed with serial imaging,” she said. “That is the context in which we can discuss with patients and their families about radiation exposure.”

According to Dr. Chen, the risks of radiation dose must always be weighed against the risks associated with the condition. “If a patient has a large aneurysm,” she noted, “an angiogram is necessary to define its morphology and relationship with other intracranial structures. The patient and doctor should weigh the risk of that aneurysm rupturing against the risk of developing a brain tumor from radiation exposure.” But such calculations are tricky “when the disease's natural history is not well defined, and the treatment is not definitively curative,” she said.

Results of this study help clarify these risk/benefit decisions, Dr. Chen added. “When we apply exposure models and population based risk assessments, we can provide estimates of their risk of developing brain tumors. With these numbers, we can compare it to risks of other things, like one's risk of getting into a car accident or being hit by lightning. This study enables us to describe risk [to patients and families] in a more relatable way.”

Commenting on the study for Neurovascular Exchange, Joseph J. Gemmete, MD, of the University of Michigan (Ann Arbor, MI), noted, “Operators should be more concerned than they are [about radiation exposure], particularly other medical subspecialties with no radiation education [who are] performing these procedures.” Pediatric patients in particular should be exposed to as little radiation as possible, given that the dose is cumulative over a lifetime, he said via email.

“The article brings new important information about the risk of radiation exposure in the pediatric population and the benefits of collimation,” Dr. Gemmete said. In addition to collimation, he recommended other techniques operators can use to limit radiation such as limiting the amount of angiographic exposures, limiting fast frame rates during angiography and having a variable frame rate, and adjusting the dose parameters from the X-ray tube so they are as low as possible yet still reveal the pathology. The latter may require adjusting the factory settings from the manufacturer, he noted.

It is also important, said Dr. Gemmete, to provide appropriate shielding for the patient and operator and to raise the table during the procedure so that the image intensifier is as close as possible to the patient, to limit scatter radiation. Magnification should be limited, and the last image save should be overlaid on the fluoroscopic image to act as a roadmap for guidance in selective catheter placement.