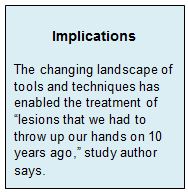 Results after repair of intracranial aneurysms—whether ruptured or unruptured—has improved in recent decades, despite the fact that more high-risk patients are undergoing treatment. The same positive signs are seen with both open surgical and endovascular approaches, researchers reported online February 2, 2016, ahead of print in Stroke.

To determine whether recent advances in the management of intracranial aneurysms has translated to better outcomes for patients, Christopher S. Ogilvy, MD, of Beth Israel Deaconess Hospital (Boston, MA), and colleagues compared 2 periods: from 1998 to 2003 (n = 1,023 aneurysms) and from 2007 to 2013 (n = 1,499 aneurysms). All procedures were conducted at Massachusetts General Hospital, a high-volume neurovascular center in Boston.

At 6-months post-treatment, the proportion of patients considered to have low or moderate disability (defined Glasgow Outcome Scale score of 4 or 5) was greater in 2007-2013 than in the earlier period. The improvement was seen no matter whether their aneurysms were ruptured or unruptured or if they underwent surgical or endovascular repair (table 1).

Improvements in endovascular tools and technologies means that patients in the later cohort were likely sicker, older, and higher risk compared with the earlier cohort, Dr. Ogilvy told WLNCMD in a telephone interview. While these findings are likely representative of tertiary care centers with large volumes of aneurysm patients, they may not reflect patterns seen in centers with low volumes, he noted. Fortunately, given strong evidence that higher volumes translate to better outcomes, aneurysm repair is increasingly being centralized to large, specialized centers.

“These were long enough epics that we weren’t just looking at learning curves,” said Dr. Ogilvy. “We’ve seen increased used of endovascular techniques, and those techniques have improved dramatically in the 2 epics we studied.” The devices used for endovascular procedures have also improved dramatically, he said. “They are lower risk, easier to use, and have better risk/efficacy profiles. That’s something that has continued to change since that second epic.”

Additionally, overall ICU care “is something people put a lot of energy into and is [also] probably better,” he continued. In addition, “case selection for which patients underwent open surgical repair or endovascular repair was enhanced in the second epic because of advances in endovascular techniques.”

Treatment of unruptured aneurysms remains controversial, said Dr. Ogilvy, because smaller aneurysms are less likely to rupture. But recent studies suggest even aneurysms as small as 4 mm could still rupture. “If you look at a population of ruptured aneurysms, 75% of those patients will have aneurysms < 10 mm” he reported, adding that the rise in treatment of unruptured cases is “indeed appropriate,” especially since repair is now safer and less invasive than it was a decade ago.

This all begs the question of whether surgeons are being wooed by improvements in endovascular tools and thus overusing the approach. It is a difficult one to answer because of the changing landscape, said Dr. Ogilvy. Whereas once the risk of a devastating complication during treatment of complex unruptured aneurysms at one point reached 20%, that risk is now below 5%, he noted. “We’re able to treat lesions that we had to throw up our hands on 10 years ago.”

At the same time, imaging techniques are now better at uncovering aneurysms that previously would have been missed, raising questions about the risk/benefit of treatment as well as the benefits of screening high-risk patients, Dr. Oglivy said.