Despite the large size of its catheter and coils, the Penumbra Coil 400 (PC400) system can safely and effectively be used to treat small intracranial aneurysms, according to research published online January 20, 2016, ahead of print in the Journal of NeuroInterventional Surgery. 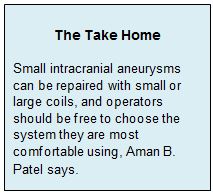 Zsolt Kulcsár, MD, of Geneva University Hospitals (Geneva, Switzerland) and colleagues conducted a retrospective analysis of prospectively collected data on 92 patients with intracranial aneurysms smaller than 10 mm who were treated at 3 centers using the PC400 system (Penumbra; Alameda, CA). Mean aneurysm size was 5.8 mm, and procedures involved a mean of 2.5 coils with a mean length of 18 cm per aneurysm. Mean packing density was 45.6%.

There were no cases of procedural aneurysm rupture, but 3 patients (3.3%) had treatment-related thromboembolic events. Two-thirds of patients had immediate adequate occlusion, with that proportion rising to 91% by approximately 7 months of follow-up.

“Large volume coils are safe and effective to use in the treatment of small aneurysms with a low thromboembolic complication rate and no hemorrhagic events,” the investigators conclude. “High packing densities were achieved with a low average number of coils used per aneurysm. The aneurysms demonstrated progressive occlusion over time, which probably suggests stability in the long term.”

Progressive occlusion “may be explained by the effect of procedural anticoagulation, although 2 mechanistic phenomena may also be implied,” Kulcsár et al suggest. One possibility “is that the high rate of inadequate occlusions immediately after coiling is related to the design of the large volume coil—that is, the aneurysms retain contrast material between coil interstices,” they note. “The other explanation may relate to neck coverage. The thick coil loops covering the orifice of the aneurysm may provide an improved physical barrier against inflow compared with regular coils and thus provide an improved flow diverting effect.”

Several lessons were gained while using the PC400 system, the researchers say.

“First, there is the need to accurately estimate the packing density that will be achieved with the coil selected prior to insertion,” they advise. “Small aneurysms may be quickly overfilled by selecting a coil that is too long. The entire coil may require removal due to the inability to introduce the last few millimeters of the coil into the aneurysm. Second, it is important to try and prevent expulsion of the microcatheter tip from the aneurysm during coil insertion. . . . Furthermore, distally located small aneurysms may not be ideal for treatment with the PC400 system, mostly due to the limitations of accessing these aneurysms with the higher profile microcatheter.”

“I’m familiar with the large coils, and I have used them for small aneurysms in the past,” Aman B. Patel, MD, of Massachusetts General Hospital (Boston, MA), told WLNCMD in a telephone interview. “The advantage of the large coil is that each individual coil has 4 times the volume.”

Theoretically, this means fewer coils are needed “to close off a particular aneurysm, which can make the procedure quicker and which may also lead to an increased amount of packing density in the aneurysm,” he said. “This then reduces the risk of recurrence in the future.”

According to Dr. Patel, there are some downsides. In particular, “it can be a little bit more difficult to place the coils. You can only put so much volume into a small aneurysm,” he explained. “And the catheter we have to use to deliver large coils is also larger, which could then potentially make it a little bit harder to catheterize a small aneurysm.”

Many interventionalists are reluctant to use large coils in small aneurysms, and that’s just fine, Dr. Patel stressed. While the paper shows feasibility, the bottom line is that operators should be free to use the tools they are most comfortable with. “The Penumbra PC400 coils are actually quite soft, so they do work, and they don’t rupture small aneurysms in my experience. But given that we have smaller coils that use smaller catheters, people have other tools available for small aneurysms,” he commented. “This is the only coil system that requires a completely different sizing paradigm, so people have to be comfortable using it. There’s no dramatic high risk if you understand how to use it, but if you don’t there are some risks.”