Breaks in continuity of care that occur when patients undergo cerebral aneurysm repair in 1 hospital but then return to a different hospital’s emergency department (ED) when they encounter a problem may have ill effects. Specifically, such breaks are associated with an increased risk of 30-day readmission, according to research published online January 11, 2016, ahead of print in the Journal of NeuroInterventional Surgery. 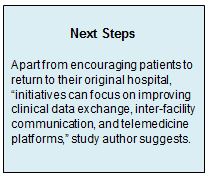 Kimon Bekelis, MD, of Dartmouth-Hitchcock Medical Center (Lebanon, NH) and colleagues performed a cohort study of 452 patients (mean age 522.2 years; 76.3% women) with cerebral aneurysms who were evaluated in the ED within 30 days after discharge following surgical clipping or endovascular coiling of aneurysms between 2009 and 2013. All patients were registered in the New York Statewide Planning and Research Cooperative System database.

“We have identified similar rates of readmission in our prior studies of endovascular treatment or clipping for cerebral aneurysm patients,” Dr. Bekelis to WLNCMD in an email. “Since our focus was not on differences between the 2 procedures, but rather on the impact of continuity of care on the rate of readmission, we decided to combine these patients in 1 cohort and control for the treatment approach in a multivariable setting.”

Overall, 218 (48.2%) of the patients were evaluated in a different hospital from where the original procedure was performed and 234 (51.8%) were seen at the original location. Hospital readmission by 30-day follow-up was more likely in the patients who lacked continuity of care (18.4%) than for those returning to the same hospital (7.7%; P = .001).

Multivariable analysis revealed that patients returning to the ED of the original hospital was independently associated with lower likelihood of 30-day readmission (OR 0.41; 95% CI 0.22-0.78). Mixed-effects logistic regression modeling produced similar results (OR 0.46; 95% CI 0.35-0.84), as did propensity score adjusted modeling (OR 0.41; 95% CI 0.22-0.77). The authors calculated that patients would need to be evaluated in their original hospital in order to prevent 1 readmission.

“Our analysis highlights that minimizing care fragmentation can have an impact on readmissions,” Dr. Bekelis commented. “Patients undergoing clipping or coiling are often evaluated in the ED after discharge for indications such as headache or other neurological changes. The specialized nature of these procedures might be an obstacle to disease-specific care, and the inability of unfamiliar providers to recognize the normal postoperative course of such patients might result in the higher rate of readmissions we are observing. These results suggest an important area of quality improvement for hospitals and policy makers.

Such fragmentation “has been shown to result in redundant and repetitive tests,” he said. “Dealing with this problem at the time of the ED evaluation might prevent unnecessary readmissions and improve patient care. . . . This process can involve physicians, nurses, and supporting staff.”

According to Dr. Bekelis, patients should be encouraged to return to the original hospital, “where disease-centered, patient-specific, and efficient care can be provided. Alternatively, initiatives can focus on improving clinical data exchange, inter-facility communication, and telemedicine platforms.”