Greater and longer-lasting complete occlusion can be achieved using a stent rather than a balloon for assisted coiling of unruptured intracranial aneurysms without compromising safety, according to a study published in the January 2016 issue of the Journal of NeuroInterventional Surgery. 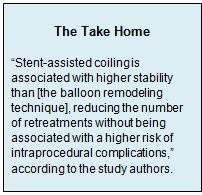 While use of stents increased sharply during the study period, balloon-assisted coiling still predominated, particularly in smaller and bifurcational aneurysms.

Complete occlusion, both immediately after the procedure and 6 months later, was more likely when coiling was done with stents. Complication rates, however, did not differ based on the technique used (table 1).

Outcomes were tied to the type of aneurysm treated. During follow-up, 22 recurrences occurred, for an overall rate of 8.9%. Of these, 11.1% occurred in the balloon-assisted group and 5.8% in the stent-assisted group. More than half (54%) of recurrences occurred in large to giant aneurysms (P < .001). All recurrences were retreated, and 1 patient underwent 2 retreatments without additional intraprocedural complications. In general, complications were more commonly encountered with bifurcational aneurysms, particularly in the middle cerebral artery (P = .016).

Higher Stability Over the Long Haul

According to Francis Turjman, MD, PhD, of the Hôpital Neurologique Pierre Wertheimer, Hospices Civils de Lyon (Lyon, France), who commented on the study via an email to WLNCMD, these findings serve as a confirmation of published data. While balloon-assisted coiling does not require use of antiplatelet therapy and is therefore associated with less bleeding risk, especially in the acute phase, the best long-term anatomical results are being achieved with stents, he said. Fundamentally, the decision to use a balloon or stent essentially remains at the operator’s discretion.

“Stent-assisted coiling is associated with higher stability than [the balloon remodeling technique], reducing the number of retreatments without being associated with a higher risk of intraprocedural complications,” Consoli et al write. “Large to giant aneurysms and those localized at bifurcations with particular characteristics (arteries originating from the sac, wide [sidewall] aneurysms or intrasaccular devices for bifurcational aneurysms has not yet been shown to be superior.