Neurosurgeons have better outcomes than neurologists and possibly even interventional radiologists when performing endovascular repair of unruptured cerebral aneurysms and subarachnoid hemorrhages, according to research published in the January 2016 issue of the Journal of Neurosurgery. 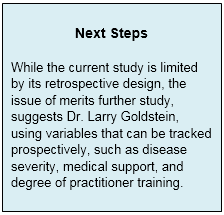 Travis M. Dumont, MD, of the University of Arizona Medical Center (Tucson, AZ), and colleagues used the University Health System Consortium database to identify cases of unruptured cerebral aneurysm and subarachnoid hemorrhage treated by endovascular obliteration between 2009 and 2013. They then evaluated whether there was a link between morbidity and mortality outcomes and the specialty of the treating physician.

Subarachnoid hemorrhage was the primary diagnosis and reason for the procedure in 8,197 cases. Within this group 2,385 (29%) experienced at least 1 complication and 983 (12%) died. Once again, the rates of complications and mortality were highest when the treating physician was a neurologist and lowest when the treating physician was a neurosurgeon, with a trend toward higher complication rates for interventional radiologists compared with neurosurgeons (table 2).

Editorialist Walter Montanera, MD, of St. Michael’s Hospital (Toronto, Ontario), and Larry Goldstein, MD, of the University of Kentucky (Lexington, KY), who spoke with WLNCMD in a telephone interview, both said that the substantial limitations of the study make it difficult to interpret.

Dr. Montanera stresses in his editorial that the data are retrospective, self-reported, and ill-defined. “There are no data allowing comparison of the patients (such as age, comorbidities, subarachnoid hemorrhage grading, etc), or aneurysms treated (such as size, location, neck width, etc),” he writes. “Neurosurgeons would choose surgical clip placement for some patients, yet surgical morbidity and mortality is not included. … There are no data concerning the procedure volumes for treating centers or individual practitioners. Higher volume centers may have a range of subspecialty expertise not available in lower volume centers, which could result in improved outcomes.”

In a response to the editorial, the study authors conducted an additional analysis evaluating complications by center volume, which revealed similar rates of complications in high- and low-volume centers for both ruptured and unruptured aneurysms. But that analysis also showed a higher mortality rate for ruptured aneurysms treated in low-volume rather than in high-volume centers (2.4% vs 1.4%, respectively, P < .001).

According to the researchers, these findings show that, “while case volume is a factor, it does not take away from the primary conclusion of the report”—namely, neurosurgeons achieve the best outcomes.

But Dr. Goldstein expressed doubt, pointing out that this additional analysis examined volume at a center level and not at an operator level. It is possible, he said, that low-volume practitioners sometimes fill in for more experienced physicians at high-volume centers.

Multidisciplinary Team May Be the Best Option

In an email interview with WLNCMD, even Dr. Dumont acknowledged that his “paper should not be viewed as rigorous proof of any finding due to its retrospective nature and other limitations of the analysis.

“I do think efforts to maximize safe care should be taken by all neurointerventional surgeons regardless of training,” he continued. “I hope observational studies such as ours help to identify and prevent unsafe practices.”

All of the physicians agreed that the findings merit further investigation. Dr. Goldstein recommended exploring the issue using variables that can be tracked prospectively, such as disease severity, medical support, and degree of practitioner training.

For his part, Dr. Dumont recommended that “treatment decisions about cerebral aneurysms should be made by a multidisciplinary team including a surgeon trained with open cerebrovascular techniques and a surgeon or interventionalist trained with endovascular techniques. At some hospitals, such as mine, this may be the same physician. I want to stress that this project does not lay any proof to these beliefs, but I believe this to be best practice.”