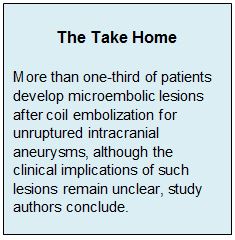 Risk of microembolic lesions following coil embolization for unruptured intracranial aneurysms is substantial, according to a study published online September 18, 2015, ahead of print in the Journal of Neurosurgery. Atherosclerotic risk factors, treatment of several aneurysms in 1 session, and stent selection were tied to risk for lesion development.

Overall, microembolic lesions were noted in 37.3% of patients. Of the 101 patients with lesions, only 3 were symptomatic.

However, previously identified risk factors for microembolism, including prolonged procedure duration, aneurysm size, and decreased antiplatelet function, were not predictive.

“Over 70% of our cohort showed less than 5 [high-intensity] spots, and 97% of our DWI-positive patients were asymptomatic,” write the authors. “It could be assumed that seeking to identify such imaging abnormalities would provide only minor clinical benefits compared with the use of less invasive endovascular treatments.”

On the other hand, “the clinical and long-term consequences of harboring a postembolization microembolism remain controversial,” they write. “In a previous study, a higher number of microemboli detected as DWI-positive spots may have been a surrogate marker for symptomatic ischemic complication.

“Microembolic silent brain ischemia is also a contributor to cognitive decline and dementia,” they continue. “In addition, these microembolic lesions after interventional procedures negatively impact cognitive functions. Because there is no unanimous opinion regarding the risks associated with harboring such lesions, it might be beneficial to reduce their numbers as much as possible.”