Discharging patients the day after elective coiling for the treatment of intracranial aneurysm is not associated with an increased risk of short-term adverse events, according to a retrospective study published online September 4, 2015, ahead of print in the Journal of Neurointerventional Surgery. 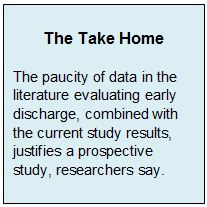 “With the increasing demands on the healthcare system and the limited resources, reducing the length of hospitalization provides an opportunity for cost savings,” write Cheemum Lum, MD, of the Ottawa Hospital (Ottawa, Canada), and colleagues.

The investigators also calculated the association between 30-day adverse outcomes and several other patient and technical variables (ie, use of flow diverter, change in modified Rankin category, rupture status, first coiling, complications, size > 7 mm, groin hematoma, sex, and anterior circulation) as well as findings on pre-discharge, diffusion-weighted imaging. Use of flow diverters was associated with an increased risk of 30-day adverse outcomes (OR 4.68, 95% CI 1.24 to 17.6), as was change in modified Rankin Scale category at discharge (OR 24.09, 95% CI 1.11 to 525.42). No differences in outcomes were observed with the other variables evaluated, including the presence of diffusion restriction predischarge (P > .05).

“Our study suggests that there is no increase in adverse outcomes with early patient discharge on the day after elective intracranial aneurysm coiling procedures,” write the authors. “Many of the post-discharge adverse events were minor.”

They acknowledge that their study has limitations, however.

“First, the study was a retrospective review and we relied on accurate and complete medical records to identify the presence of adverse outcomes and to assess the different predictors of these outcomes,” Dr. Lum and colleagues write. “Our intent was to determine if there were sufficient data to proceed with a prospective study evaluating early discharge.

“There is a possibility that more adverse events occurred and were not registered in our hospital electronic medical system, either due to incomplete documentation or to presentation to other healthcare facilities,” they continue. “However, we believe this had a minimal effect on our results, given that the patients were seen in the interventional neuroradiology clinic on follow-up and any complaint or presentation to an outside clinic or ED was documented.… Second, the number of patients included in the study may have limited the assessment of the effect of different factors on the outcome rate.”

The researchers conclude that a prospective study is justified given the paucity of published literature evaluating early discharge after elective endovascular aneurysm therapy.