In patients with unruptured ophthalmic artery (OphA) aneurysms, the balloon occlusion test (BOT) can be used to predict whether endovascular therapy is likely to result in loss of vision, reports a retrospective study published online June 25, 2015, ahead of print in the Journal of NeuroInterventional Surgery. 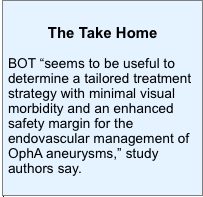 Pyoung Jeon, MD, of Samsung Medical Center (Seoul, South Korea), and colleagues reviewed details on 31 consecutive patients (n = 33 OphA aneurysms) treated at their center between August 2005 and 2013. All but 1 of the patients were women (96.8%), and most aneurysms were wide neck (81.8%). Three of the patients with narrow-neck aneurysms had an adjoined orifice of the OphA with the aneurysmal neck and did not undergo BOT.

Therefore, 28 patients ultimately received BOT, in which a hypercompliant balloon was temporarily inflated before endovascular coiling. Visual function was evaluated before and after BOT by neurosurgeons or neurointerventional cardiologists and at follow-up by questionnaire.

No Loss of Vision

Intact collateral circulation was identified in 26 of the 28 patients who underwent BOT (92.9%). Among them, complete occlusion of the OphA occurred after coiling in 3 patients, although retrograde filling of the OphA with choroidoretinal blush was seen on postprocedural angiography. In the remaining 23 patients (n = 25 aneurysms), angiography showed preserved antegrade flow of the OphA despite various degrees of coil protrusion into the artery’s orifice.

Of the 2 patients with no initial signs of collateral flow, one had an OphA that was deeply incorporated into the aneurysmal sac and therefore was observed rather than treated. The other patient had an adjoined orifice of the OphA with the aneurysmal neck and underwent endovascular coiling using the stent-assisted technique, showing complete embolization of the aneurysm and preserved antegrade flow of the OphA on post-treatment angiography.

No balloon-associated complications were observed in terms of ICA dissection or thromboembolic occlusion of the distal vessels. There were no signs of changes in visual acuity during treatment or follow-up for patients treated endovascularly.

“Given the propensity for a wide-neck configuration and for the branch artery to be deeply incorporated into the aneurysmal sac, problems with the endovascular treatment of OphA aneurysms remain to be addressed,” the authors explain, noting that endovascular coiling with OphA preservation could successfully treat most cases and result in acceptable outcome.

“The BOT,” they say, “seems to be useful to determine a tailored treatment strategy with minimal visual morbidity and an enhanced safety margin for the endovascular management of OphA aneurysms.”

Today, flow-diverting treatment is often used for addressing OphA aneurysms, Dr. Jeon and colleagues note. However, this option is also not likely “to be free from the latent risk of ophthalmic compromise during treatment of OphA aneurysms,” they suggest. “Further studies are needed to understand the mechanism of thromboembolic complications in side branches with collateral flows.”