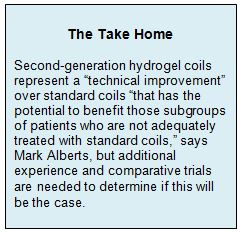 Novel coils using hydrogel technology can increase the packing density of coiled aneurysms, resulting in fewer recurrences and retreatments, according to the results of a multicenter European trial presented last week at the 2017 International Stroke Conference (ISC) in Houston, TX.

The minimally invasive nature of coiling is increasingly making it the preferred choice over clipping for the treatment of eligible aneurysms. But “the major drawback of aneurysm coiling lies in its relatively high aneurysm recurrence rate,” said lead author Christian A. Taschner, MD, PhD, of the University Hospital Freiburg (Freiburg, Germany), during a presentation of his data. In an effort to reduce recurrence rates, MicroVention (Tustin, CA) has developed the Hydrosoft/Hydroframe second-generation hydrogel coil. The device “consists of a filament within the coil, which upon contact with liquids amplifies its volume and thereby increases packing density of the coiled aneurysm,” he said.

Dr. Taschner and colleagues compared outcomes of 500 patients with intracranial aneurysms (42% of them ruptured) that were treated at 1 of 22 clinical sites in France and Germany between October 2009 and January 2014 using standard platinum coils (n = 253) or hydrogel coils (n= 247). The type of coil used was determined randomly.

By 18 months, 17 patients in the hydrogel coil group and 11 in the standard coiling group were lost to follow-up. Among the remaining patients, 19.9% of those treated with hydrogel coils and 28.7% of patients treated with standard platinum coils had met the criteria for the adverse composite endpoint of major aneurysm recurrence, retreatment for major recurrences, morbidity that prevented angiographic follow-up, or death (table 1).

The authors calculated that use of the hydrogel coil was associated in a reduced risk of experiencing the composite adverse outcome, stratified by aneurysm rupture status, of 8.4% (95% CI 0.5-16.2, P = .036).

At the same press conference, Mark Alberts, MD, of Hartford Healthcare (Hartford CT), and spokesperson for the American Stroke Association pointed out that the overall adverse event rate in both arms of the study was higher than that typically seen in the United States. But Dr. Taschner explained that the high figures are due to the use of a composite endpoint that lumped together recurrence, retreatment, morbidity, and mortality.

Dr. Taschner also acknowledged that the potential risk of migration of the hydrogel filaments into the blood vessel is a disadvantage of the new coils, especially when used in wide-necked aneurysms. To avoid this, operators frequently use balloons or stents to prevent coil loops from entering the parent vessel.

In an interview with Neurovascular Exchange, Dr. Alberts described the new technology as “an evolution, a technical improvement in standard therapy . . . that has the potential to benefit those subgroups of patients who are not adequately treated with standard coils.”

The hydrogel coils are undergoing postmarket testing in Europe, and they have yet to be adopted for regular use in the US, said Dr. Alberts. He suggested that the logical next steps are to “get them in hands of more and more physicians” so operators can gain experience and to conduct additional large, prospective randomized trials comparing the devices with standard coils. “Time will tell if it catches on,” he said.