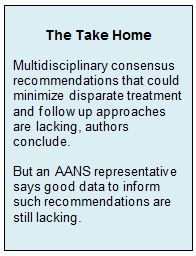 Physicians who treat intracranial aneurysms vary considerably in their approach to patient selection, preferred treatment, and follow-up imaging, according to survey results published online February 9, 2017, ahead of print in the Journal of NeuroInterventional Surgery. The authors suggest it is time for major medical societies to develop consensus recommendations to help standardize practice, but a representative of the American Association of Neurological Surgeons (AANS) says better data are needed first.

In the summer of 2016, Kyle M. Fargen, MD, of Wake Forest University (Winston-Salem, NC) and colleagues sent a link to the online 25-question survey to members of the Society of NeuroInterventional Surgery, Society of Vascular and Interventional Neurology, and the AANS/Congress of Neurological Surgeons Combined Cerebrovascular Section.

Overall, 211 physicians completed the anonymous survey. Of the respondents, most (55%) were neurosurgeons. The majority reported training in endovascular techniques, having more than 5 years of personal independent practice, practicing at an academic center, and treating more than 25 aneurysms a year personally.

In terms of preferred treatment for aneurysms, considerable variability was seen and some trends emerged. Notably, surgical clipping was the option of choice for most middle cerebral arteries, with endovascular techniques dominating preferences for the treatment of aneurysms in other locations. Just over half of respondents preferred the use of flow diverters to treat wide-necked internal carotid artery aneurysms, and about the same proportion preferred primary coiling for aneurysms of the anterior or posterior communicating artery or the vertebral-posterior inferior cerebellar artery. For basilar apex aneurysms, typical treatment was coiling, with or without the addition of a stent (table 1).

Neurosurgeons at academic institutions and those practicing longer were more likely to recommend clipping surgery for aneurysms (P < .05).

“To date there is a relative lack of guidelines to assist in the selection of patients for endovascular or microsurgical treatment of ruptured or unruptured cerebral aneurysms based on natural history, location, morphological features of the aneurysm, and patient characteristics such as age,” write the study authors. “The uncertainty about natural history, the considerable morbidity and mortality associated with rupture, and innate practice preferences in the three different specialties that treat cerebral aneurysms have led to highly disparate treatment practices.”

Based on these survey results, the authors recommend that, “a focus on developing evidence-based consensus recommendations involving members of all three of the major societies might be useful in standardizing practice patterns in the USA.”

Robert E. Harbaugh, MD, of Penn State Hershey Medical Center (Hershey, PA), told Neurovascular Exchange that the survey findings “point out the uncertainties that cerebrovascular specialists face when dealing with patients who have both ruptured and unruptured aneurysms.” It is no surprise, he added, “this is what you see when you have a disruptive new technology.”

But it may be premature, he cautioned, for professional societies to develop guidelines or consensus statements to guide treatment. “I don’t think there is a right answer now as to how these patients should be treated,” said Dr. Harbaugh, who served as president of the AANS in 2015 and is currently chair of NeuroPoint Alliance, its data-collection arm.

While there is some consensus with regard to the management of certain aneurysm subsets, such as an endovascular approach for those that arise in the posterior circulation, for most aneurysms the “best” treatment remains an open question. To date, the Barrow Ruptured Aneurysm Trial has demonstrated that the relative benefits and risks of open vs endovascular repair are essentially “a wash,” he noted.

Dr. Harbaugh is working with colleagues to develop a prospective registry trial comparing the 2 treatments that will use propensity-score matching as a form of pseudorandomization. The results of such a trial would provide reliable evidence as to which approach offers the best long-term outcomes. Based on these findings, consensus statements and guidelines can be developed.