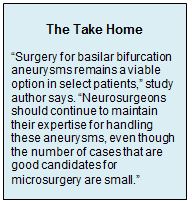 Endovascular repair is largely taking over the treatment of basilar apex aneurysms, but neurointerventionalists still require the skills needed to repair these aneurysms microsurgically, researchers suggest. A small proportion of carefully selected patients are better off with the microsurgical approach, because it can offer lower recurrence rates and reduce the need for retreatment, according to a new study published online January 13, 2017, ahead of print in the Journal of Neurosurgery.

Aaron A. Cohen-Gadol, MD, of Indiana University (Indianapolis, IN), and colleagues reviewed a prospectively maintained database of 208 consecutive patients treated for basilar apex aneurysms between 2000 and 2012. Of these patients, 161 were treated endovascularly and 47 via microsurgery. Aneurysms were ruptured in 57% of the endovascular group and 51% of the microsurgery group.

Mean Glasgow Outcome Scores and Hunt and Hess Grades were similar for both groups of patients at discharge and after 1 year of follow-up, as was the rate of rehemorrhage. Patients treated endovascularly had a lower rate of postoperative cranial nerve defects and hemiparesis than those treated surgically, but they were also more likely to have a remnant left behind and to require retreatment (table 1).

Stent placement significantly reduced the need for retreatment among patients who had endovascular treatment.

Dr. Cohen-Gadol told Neurovascular Exchange the findings demonstrate that “surgery for basilar bifurcation aneurysms remains a viable option in select patients. Neurosurgeons should continue to maintain their expertise for handling these aneurysms, even though the number of cases that are good candidates for microsurgery are small.”

Basilar apex aneurysms most amendable to clipping, he said, “are clearly pointing, away from the perforators, and relatively accessible when compared to the altitude of the posterior clinoid.” Patient characteristics come into play as well, he added, with young patients requiring long-term durability but in otherwise good health being most suitable.

Dr. Cohen-Gadol suggested that basilar apex aneurysms “should be treated at centers of excellence where there is both strong microsurgical and endovascular expertise.” He would like to see results of prospective studies comparing an endovascular with a microsurgical approach but acknowledged this is virtually impossible, given the small number of aneurysms suited for clipping.

In a telephone interview with NVX, Laligam Sekhar, MD, of the University of Washington (Seattle, WA), identified some important limitations of the study. Notably, the authors failed to identify which important aneurysmal characteristics, such as aneurysm size, neck size, dome-to-neck ratio, and aspect ratio, were used to determine how patients were selected for a microsurgical or endovascular approach and whether stents would be needed during endovascular repair.

He also questioned the use of the Glasgow Outcome Scale to measure outcome, particularly at discharge. The mRS would have been a more appropriate option, he said. “The fact that they say the Glasgow Outcome Scores were similar could have meant one of two things. Either the measurements were not accurate, or they simply did not have enough patients to make a statistical comparison. So, I would say their results actually favor endovascular rather than microsurgical treatment.”

“Increasingly, the expertise for treating microsurgically is declining because more and more of these aneurysms are being treated by endovascular [techniques],” he said, noting that this is particularly the case for the treatment of aneurysms of the posterior circulation. “The new generation of neurosurgeons who are being trained will have a lot of problems unless they [undergo] a fellowship doing microsurgery because, more and more, people will take shortcuts.”

For example, he predicted that the number of people able to do bypass for complex aneurysms will go down because use of that procedure has “decreased markedly.” The expertise could be gone within 10 to 15 years, Dr. Sekhar said, so “surgeons should absolutely keep up their microsurgical skills.”

Drs. Cohen-Gadol and Sekhar report no relevant conflicts of interest.