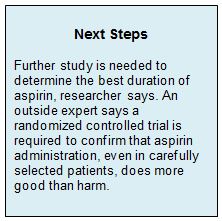 Patients with angiographic features suggesting they are at high risk for thromboembolic events during endovascular treatment of ruptured intracranial aneurysms appear to do well when aspirin is added to the mix. The results, from a single-center experience, were published online January 6, 2017, ahead of print in the Journal of Neurosurgery.

Currently, there is no widespread consensus with respect to antiplatelet use during coiling of ruptured aneurysms. “I have trained [or] worked at multiple institutions across the country, and I must say that I have observed quite a large degree of practice variability regarding this,” lead author Nancy J. Edwards, MD, of the University of Texas Health Science Center (Houston, Texas) told NXV in an email.

Some institutions avoid giving aspirin in all patients with subarachnoid hemorrhage, while others leave it to the discretion of the neurointerventionalist or surgeon, she said. Thus, a primary goal of this study was to help standardize practice.

Dr. Edwards and her colleagues reviewed their institution’s prospective registry of 169 patients treated endovascularly for intracranial aneurysms. They identified 79 patients with ruptured aneurysms considered to be at high risk for thromboembolic events and performed a controlled before-and-after study to evaluate whether selective administration of aspirin could reduce the risk of periprocedural thromboembolism without increasing the risk of major hemorrhage.

The investigators found 6 angiographic features that were associated with thromboembolic events during and up to 72 hours after coiling:

Use of aspirin in patients possessing these high-risk features was associated with a significant reduction in the risk for periprocedural thromboembolic events. Conversely, there were no major systemic hemorrhagic events, and aspirin was not associated with the likelihood of aneurysm rebleeding, symptomatic intracranial hemorrhage, or major external ventricular drain (EVD)-associated hemorrhage. There was an increase in asymptomatic, minor (< 1 cm) EVD-associated hemorrhage among patients who received aspirin, however (table 1).

Table 1. Effect of Aspirin on Thromboembolic and Hemorrhagic Complications

The significant effect of aspirin use on risk of thromboembolic events remained even after accounting for age, sex, cardiovascular risk factors (ie, smoking, diabetes, hypertension, dyslipidemia, coronary artery disease), and factors associated with such events in other large studies (ie, wide aneurysm neck, aneurysm size ≥ 10 mm), with an adjusted odds ratio of 0.16 (95% CI 0.03-0.8).

Dr. Edwards explained to NVX that the key to the successful use of aspirin lies in appropriate patient selection: limiting its use only to those patients at highest risk for thromboembolic events. “Patients at low risk have such low event rates that it would require very large patient numbers—thousands, or even tens of thousands—to see any further reduction in event rate,” she said. Therefore, Dr. Edwards limits her recommendations for use of aspirin to those with high-risk features, as based on the 6 angiographic factors identified in the study. She speculated that in lower-risk patients, all aspirin administration does is potentially increase the odds of bleeding.

“Further studies are needed to determine the exact duration of antiplatelet therapy that is helpful,” said Dr. Edwards. “We gave aspirin for 2 weeks, but it is unclear if patients only need it for [a few] days.”

Commenting on the study, Walter M. van den Bergh, MD, PhD, of the University of Groningen (Groningen, the Netherlands), concurred that antiplatelets are used irregularly in the context of ruptured aneurysms undergoing endovascular treatment.

For his part, Dr. van den Bergh said the clinical implications of the findings are limited by the fact that this study represents only a small, single-center experience. A randomized controlled trial is needed to confirm that aspirin administration, even in carefully selected patients, does more good than harm.