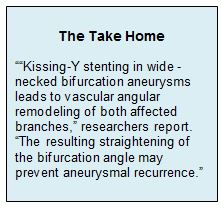 Using a technique known as “kissing-Y stenting,” researchers in Germany have successfully treated wide-necked intracranial bifurcation aneurysms in a manner that alters vascular angle remodeling to reduce the risk of recurrence. Their findings are published online December 5, 2016, ahead of print in the Journal of NeuroInterventional Surgery.

Endovascular treatment of these aneurysms represents a technical challenge, according to Katharina Melber, MD, of Sana Kliniken Duisburg (Duisburg, Germany), and colleagues. They point out that research has already confirmed that use of a single stent increases the angle of the bifurcation branch and significantly changes hemodynamics by “deflecting the blood flow towards 1 stented bifurcation branch, [which] decreases apical pressure and narrows the effective aneurysmal neck.” There is concern that such changes increase the risk of recurrence.

The kissing-Y approach involves using 2 stents that are placed side-by-side in a “Y” formation in the parent artery, such that each of the distal microstent ends is placed in 1 bifurcation branch. The resulting changes in hemodynamics produces reduced flow velocity in the aneurysm and redirection of the impingement flow, particularly when closed cell stents are used.

Before and after stenting, the investigators used digital subtraction angiography to determine vascular angle geometry between the mother and both affected daughter vessels. This revealed that the kissing-Y technique decreased the angle between the bifurcation branches from 130.4 ± 9.5° to 91.5 ± 9.1° (P < .0001).

“As far as we are aware,” write the authors, “this is the largest study showing changes in vascular geometry induced by kissing-Y stenting in complex intracranial bifurcation aneurysms.” They note from their findings that the technique not only narrows the bifurcation angle but that the angle continues to decrease over time. They also report that there was no significant relationship between vessel diameter and vascular angle remodeling. However, the larger the bifurcation angle before stenting, the greater the change in posttreatment angle.

“Kissing-Y stenting in wide-necked bifurcation aneurysms leads to vascular angular remodeling of both affected branches,” the study authors conclude. “The resulting straightening of the bifurcation angle may prevent aneurysmal recurrence.”