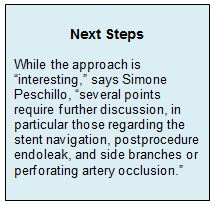 “Intracranial blood blister-like aneurysm is a rare type of aneurysm that lacks all layers of the arterial wall,” Fei Teng, MD of Shanghai Tongji Hospital and Tongji University School of Medicine (Shanghai, China), and colleagues say. “These fragile aneurysms have the propensity to rupture with minimal manipulation, which makes them hazardous and difficult to treat.”

Such aneurysms “typically have thin, fragile walls and poorly defined necks, sometimes appearing as just a protrusion of the vessel wall,” Dr. Peschillo explained, adding that they are linked to diffuse subarachnoid hemorrhage and severe clinical condition. “These lesions can be dangerous,” he continued, “because of their propensity to rupture intra-operatively and postoperatively. [They] are often not easily detected at the first angiography due to their small dimensions and unusual locations, but, because of their rapid growth, they become more evident within a few days.”

Dr. Teng and colleagues conducted a retrospective review of 7 men and 6 women aged 28-68 years who had ruptured blood blister-like aneurysms that were treated endovascularly using a Willis covered stent.

Stents were placed successfully in all cases. Immediate angiography revealed complete aneurysmal occlusion in 12 patients and mild endoleak in 1. The high rate of occlusion allowed for the safe administration of dual antiplatelet therapy for a minimum of 6 months following the procedure. Occlusion of the ophthalmic artery occurred in 2 patients and occlusion of the anterior choroidal artery in 1 but did not result in acute or delayed clinical symptoms. None of the patients developed thrombosis, aneurysmal rupture, or other complications.

Angiographic follow-up performed 4-6 months after the procedure revealed complete aneurysmal occlusion without any aneurysm recurrence in all patients. Only 2 patients had symptoms of mild-to-moderate in-stent stenosis. All patients had an mRS score of 0-1.

To NVX, Dr. Peschillo explained that numerous treatments for blister-like aneurysms have been proposed over the years. These include “microsurgery, including clipping techniques, titanium vascular miniclip internal carotid artery repair, vessel graft wrapping reinforced by clips, trapping, parent vessel occlusion and revascularization, and endovascular approaches, which can be performed with coils, coils and stenting, multiple stents, stenting alone, or vessel occlusion.” Flow diverters are also showing early promise, he reported. To date, however, there is no consensus on how best to approach them.

According to his recent meta-analysis, Dr. Peschillo noted, “endovascular treatment seems to be associated with lower morbidity and mortality, and the percentage of good outcomes (mRS 0-2) in the endovascular group was high using flow diverters (82%), stent-assisted coiling (85.2%), and non-flow diverter stents (86.4%), though the best results were obtained with parent artery occlusion (88.9%, P = .266)”.

The authors write that the Willis covered stent, which was designed specifically for intracranial use, “has been a significant advancement in the treatment of aneurysms.” Various design improvements over the years, they note, have resulted in increased flexibility, which allows the stent to be guided more easily through tortuous intracranial vasculature. While the Willis covered stent has demonstrated efficacy in many types of aneurysms, this series is the first to report on its success with blood blister-like aneurysms.

The single mild endoleak that occurred in this series resolved spontaneously on follow-up, and the authors suggest some strategies for avoiding endoleak all together. These include careful estimation of the size of the parent artery and aneurysm to allow for selection of a correctly sized stent, avoiding displacement of the stent by maintaining inflation pressure during deployment until full stent apposition and removal procedure as well as maintaining negative pressure during balloon removal, and reinflation of the stent or use of a second stent when endoleak is observed during the procedure.

As to the advantages and disadvantages of flow diverters vs Willis covered stents for this indication, Dr. Fang and colleagues point out that flow diverters are more flexible and easier to navigate, while Willis covered stents are more likely to produce side branch occlusion. On the other hand, this study suggests the stents may produce higher rates of immediate complete occlusion. They are also less likely to require delays in treatment due to fears of intra- or postprocedure bleeding.

“This proposed approach by Fang et al with intracranial covered stents is quite interesting,” said Dr. Peschillo. “However, several points require further discussion, in particular those regarding the stent navigation, postprocedure endoleak, and side branches or perforating artery occlusion. This method could be an advantage [for achieving] the occlusion of the aneurysm much more rapidly.”

Studies with large, homogeneous groups of patients are needed to further elucidate the best approach.

Dr. Teng and Peschillo have no relevant conflicts of interest.