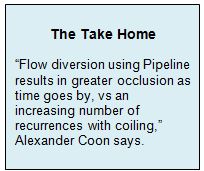 In patients with giant wide-neck aneurysms of the intracranial internal carotid artery (ICA) that are uncoilable or have failed treatment, flow diversion with the Pipeline embolization device results in vascular remodeling that improves occlusion over time, according to a prospective study published online October 14, 2016, in the Journal of Neurosurgery. Importantly, late complication rates were also very low.

The current report focuses on 3-year follow-up, at which time 74 subjects with 76 aneurysms underwent catheter angiography as required by the study protocol.

Complete angiographic aneurysm occlusion was observed in 71 aneurysms, for a cure rate of 93.4% (up from 73.6% at 180 days). All 5 remaining aneurysms were retreated using either coils or additional Pipeline devices for failure to occlude. Three of these 5 cases were cured by the 3-year follow-up. Angiographic cure with 1 or 2 treatments of Pipeline embolization alone was therefore achieved in 92.1%. No recanalizations of previously completely occluded aneurysms were seen on the 3-year angiograms.

There were 3 delayed device- or aneurysm-related serious adverse events, for an overall event rate of 2.6%. None of these led to permanent neurological sequelae. There were no major or minor late-onset hemorrhagic or ischemic cerebrovascular events or neurological deaths from 6 months posttreatment through the 3-year follow-up period.

Among the 103 surviving patients, 85 underwent functional assessment, with 80 having an mRS score of 0-1.

In a telephone interview with Neurovascular Exchange, Alexander Coon, MD, of Johns Hopkins University School of Medicine (Baltimore, MD), said the findings were as he expected. “The fundamental thing this study shows is that flow diversion using Pipeline results in greater occlusion as time goes by vs an increasing number of recurrences with coiling,” Dr. Coon explained. “This drives home the concept that I share with my patients that with flow diversion, time is your ally.”

Onus on Operators to Learn to Use New Tools

When flow diverters first became available, he noted, the concern was that more complications would outweigh the benefits of more occlusion, but as devices have become more refined and operators more experienced, complication rates have become similar to or even lower than coiling.

While smaller studies continue to be published showing higher than expected complication rates with flow diverters, Dr. Coon said these less than stellar outcomes often result from lack of operator experience. When operators and centers have more complications with flow diverters than what has been seen in large, multicenter trials involving high-volume centers, Dr. Coon recommends they consider what they are doing differently from the better performers. Complication rates can be lowered when operators reach out for advice and training from more experienced centers or, if that fails, by referring patients to these centers, he said.

“It is believed that almost 30% of aneurysms are being treated with flow diversion today in US,” he said. “This is not a thing of the future, it’s the present. So, all interventionalists must learn to use it properly and safely.”