Intracranial aneurysms can safely be coiled despite the presence of symptomatic vasospasm, according to research published online November 3, 2016, in the Journal of NeuroInterventional Surgery. 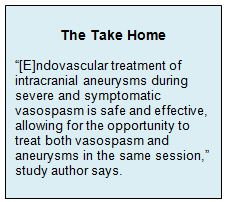 Cagatay Andic, MD, of Başkent University (Adana, Turkey), and colleagues retrospectively assessed outcomes of 15 consecutive patients who underwent endovascular treatment of 18 aneurysms during severe and symptomatic vasospasm between June 2011 and May 2016. The aneurysms were treated by single catheter coiling in 9 cases, stent-assisted coiling in 8, and balloon-assisted coiling in 1.

In an email to Neurovascular Exchange, Dr. Andic explained that following subarachnoid hemorrhage, “symptomatic vasospasm is one of the major causes of increased morbidity and mortality.

“Angiographic evidence of vasospasm is detected in approximately 70% of [such] patients, but the relationship between angiographic spasm and clinical symptoms can be inconsistent,” he continued. “Symptomatic vasospasm occurs in 20% to 40 %.”

While the presence of vasospasm is not a true contraindication for coiling, Dr. Andic said, it definitely makes it a more technically difficult and risky procedure. As a result, some interventionalists hesitate to coil during active vasospasm.

In this study population, improvement in vasospasm was evident on angiography for all patients after treatment. This included a noticeable dilation of the spastic parent arteries following deployment of the stents. Immediate posttreatment angiography revealed that 14 aneurysms (77.8%) had class I occlusion and 4 (22.2%) had class II occlusion.

There were three deaths in the course of subarachnoid hemorrhage. Mortality was related to poor grade of the hemorrhage (Hunt and Hess grade V) and cardiovascular complications in 2 patients and to refractory vasospasm in 1.

The remaining patients had favorable clinical outcomes at follow-up, defined as an mRS 0-2.

Both Conditions Treated in One Session

During endovascular treatment, he said, most interventionalists manage vasospasm with chemical and mechanical angioplasty, but there remains no consensus regarding the best sequence for treating the aneurysm and the vasospasm.

“Our findings support the results of previous studies demonstrating that the endovascular treatment of intracranial aneurysms during severe and symptomatic vasospasm is safe and effective, allowing for the opportunity to treat both vasospasm and aneurysms in the same session,” said Dr. Andic.

The study provides data to help facilitate selection of available treatment techniques and potentially broadens the patient selection criteria for use of these techniques, he added, because it contributes to evidence that “stent-assisted coiling for the treatment of wide-necked and complex aneurysms is feasible in the presence of severe vasospasm and also demonstrates some additional benefits of mechanical vasodilatation of spastic vessels.”

Dr. Andic reported that he and his colleagues “also hypothesized that the securing of the aneurysm and excluding the aneurysmal sac from the circulation may possibly induce some degree of vasodilatation, especially on the pre- or post-aneurysmal portion of the spastic parent arteries,” he noted. “Further studies with extended series should be structured in an experimental manner to confirm this, and figure out the physiologic and histological underpinnings of our outcomes.”