Researchers have pinpointed several factors linked to the need for shunting following aneurysmal subarachnoid hemorrhage (SAH) as well as the likelihood of a poor outcome, according to a new study published online September 15, 2016, ahead of print in Stroke. 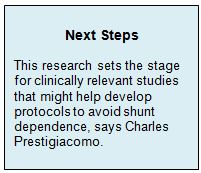 The researchers identified 6 groups of patients with a successively increased risk for shunting, based on the presence of external ventricular drainage, hydrocephalus on admission or meningitis as well as age ≤ or > 57 and the vascular branch involved (table 1).

The area under the curve-receiver operating characteristic curve for the exploratory sample to predict shunt dependency was 0.82. For the internal validation sample, it was 0.78.

However, the external validation using the UT Southwestern cohort resulted in an area under the curve-receiver-operating characteristic curve of 0.68. According to Dr. Prestigiacomo, who discussed the study with Neurovascular Exchange, the model “held out ok” with the Texas cohort. “That tells me the model is onto something. It [just] needs a little bit more delineation of its details,” he said.

To Shunt or Not to Shunt

“In their data, almost 1 in 5 [patients] who had a SAH and survived 2 weeks ended up getting a shut. So, that’s a pretty big issue, because shunts are filled with complications over the lifetime of patient,” said Dr. Prestigiacomo.

In an email interview with Neurovascular Exchange, Dr. Huttunen pointed out that the study “has demonstrated that mortality and morbidity is higher in the shunt-dependent SAH patients. [They] seem to have poorer neurological outcomes and more often cognitive deficits. In addition, shunted patients are prone to short- and long-term shunt-related complications, including life-threatening obstructions and infections that can further reduce the overall outcome.”

On the other hand, in patients who need one, shunts can be lifesavers, Dr. Prestigiacomo, emphasized. “They have changed how patients survive after subarachnoid hemorrhage. The beauty of it is to try to understand which patients need it.”

Although many of the risk factors seen here are already familiar, he said, the large size of the population and the many variables considered helped to identify which factors matter the most “[Some] of the things we usually say are important, such as how bad the patient is when they first show up and the Fisher grade … were not as important as the location of the aneurysm,” Dr. Prestigiacomo noted.

Dr. Huttunen’s research has shown that infection in the cerebrospinal fluid (CSF) is a major contributor to shunt dependency after SAH. “Some studies have suggested that the usage of prophylactic antibiotics in SAH patients is required if patients have external CSF drainage,” he pointed out. “Others have suggested that strict drainage protocols, minimum sampling of CSF, and usage of antibiotic-impregnated drainage catheters can reduce the risk for CSF infections.”

It would be particularly interesting, Dr. Prestigiacomo suggested, to compare cohorts of patients treated using different shunting protocols to see if these protocols have any impact on future dependency.

On the need for further research, Dr. Huttunen agreed. “There is heterogeneity of treatment across different centers,” he noted. “The type of shunt that is being inserted, the timing of shunt insertion, and type of follow-up that patients receive can vary widely. We feel that these areas need to be studied in order to improve the outcome of shunted patients. That is also the reason why we have initiated the aSAH-PARAS Consortium, to address these key questions.”

Another important research topic, he added, is the appropriate management of hydrocephalus in the acute and chronic phases following SAH. Their review of the literature revealed that there are currently no existing guidelines for it, which likely reflects a lack of evidence necessary to guide recommendations.

Adams H, Ban VS, Leinonen V, et al. Risk of shunting after aneurysmal subarachnoid hemorrhage: a collaborative study and initiation of a consortium. Stroke. 2016;Epub ahead of print.

- Dr. Prestigiacomo reports being a consultant for education to Stryker, Codman, and Aesculap.