- Multicenter analysis evaluates use of Pipeline for small intracranial aneurysms

The Pipeline device is a safe and effective treatment for intracranial aneurysms no more than 7 mm in diameter, according to results from a multicenter review said to be the first of its kind. Complication rates appear to be similar to those seen with traditional endovascular techniques. 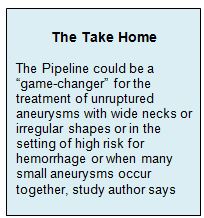 In their paper published online August 1, 2016, ahead of print in Neurosurgery, Christoph J. Griessenauer, MD, of Harvard Medical School (Boston, MA), and colleagues evaluated results with the Pipeline Embolization Device (Covidien/ev3, Plymouth, MN) for the treatment of anerysms ≤ 7 mm at 5 major academic institutions in the United States. The cohort included 149 aneurysms that occurred in 117 patients (mean age 54 years, 86% women) and were treated between 2009 and 2015.

“We tend not to treat small aneurysms too frequently,” Dr. Griessenauer told Neurovascular Exchange in a telephone interview. “So, by combining 5 centers, we were able to get a more representative number all around.”

Aneurysms were most commonly located in the paraophthalmic of the internal carotid artery segment (67.1%). Radiographic outcome, assessed via digital subtraction angiography, was available at last follow-up for 123 aneurysms (82.6%). Among these aneurysms, 87% were found to be completely occluded. Thromboembolic complication rate was 8.7%, and symptomatic procedural complications occurred in 6% of aneurysms. Mortality was 0.9%, but deaths were deemed unrelated to the Pipeline procedure. Good clinical outcome, defined as an mRS 0-2, was achieved in 96% of electively treated patients.

Independent predictors of procedural complications were aneurysmsize less than 4 mm, use of balloon angioplasty to open the device, and simultaneous treatment of multiple aneurysms (table 2).

Without the Pipeline device, the only other endovascular options for treating these aneurysms would be primary coil embolization or stent-assisted coil embolization, Dr. Greissenauer noted.

“Primary coil embolization in particular may not be a good option for aneurysms that have relatively wide necks because the coils will not stay within the aneurysms,” he said. “They need a stent. The Pipeline is a nice [alternative], because you don’t have to put anything inside the aneurysm. For that reason, you don’t have the risk of causing damage to the aneurysm while you’re inside it.”

Another advantage of the Pipeline device, he said, is that “both primary coil embolization and stent-assisted coil embolization, depending on the location, are relatively prone to recanalization, whereas the Pipeline, for the most part, once the aneurysm is gone it does not recur. There have only been a few cases. We haven’t seen any recanalization. We had [approximately] 10% of aneurysms thar did not fully occlude. In some of those, we put a second Pipeline device in.”

Since the risk of recanalization is so much lower with the Pipeline, Dr. Greissenauer said, patients treated with this device generally require far less follow-up than those treated with coiling.

According to Dr. Greissenauer, Pipeline is “especially useful for unrputured aneuysms in the setting of high risk of hemorrage [because of factors such as hypertension or female gender] and for irregularly shaped aneurysms, predominantly in the carotid artery circulation. For those aneuyms the Pipeline is a game-changer because open surgery is not trivial and coiling and stents have drawbacks.” He also noted that the Pipeline is “incredibly valuable for a whole bunch of small aneurysms that occur together. You can use a long enough Pipeline to cover them all. Otherwise, you would have to coil each one.”

Greissenauer acknowleged that longer follow-up of these patients is needed to confirm the findings. He anticipates, however, that outcomes with the Pipeline will only improve as operators gain experience and the device is further refined. In this series, patients were treated with either the first- or second-generation Pipeline, Greissenauer added, but the newer Pipeline Flex has largely taken over because it is easier to deploy and manipulate.