Use of flow diverters for carotid siphon aneurysms can affect the flow through the posterior communicating artery if the stent covers the artery ostium, particularly when P1/posterior communicating artery flow ratio size is large. There do not appear to be any clinical sequelae to this flow change, however, according to a study published online July 7, 2016, ahead of print in the Journal of NeuroInterventional Surgery. 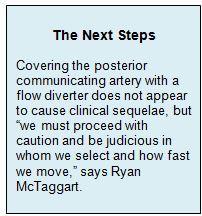 “A recurrent concern about the use of [flow-diverter stents] relates to their occlusion of side branches,” write the authors, led by Fernando M. de Carvalho, MD, of Bicêtre Hospital (Bicêtre, France). “When placed within the internal carotid artery, the main problem is the coverage of the ophthalmic artery, the posterior communicating artery, and the anterior choroidal artery.”

While carotid siphon branch occlusion has been studied, they report, researchers have typically focused on the Pipeline embolization device (Covidien) and limited their investigations to occlusions of the ophthalmic and anterior choroidal arteries.

Importantly, no symptoms related to flow changes were observed.

Giuseppe Lanzino, MD, of the Mayo Clinic (Rochester, MN), told Neurovascular Exchange in an email that the use of flow diverters for this indication is quite common nowadays because “there is no need to go into the aneurysm itself, [and the procedure] potentially treats the diseased segment of the vessel instead of the aneurysm alone. . . . The treatment is approved for proximal internal carotid artery aneurysms which have a ‘side-wall; morphology.”

On the other hand, patients must remain on dual antiplatelet therapy postprocedure, he said, adding that sometimes the only way to perform it is to cover up other important vessels. This study “confirms what we have all observed: that it is safe to cover vessels with a flow diverter, and these vessels may undergo angiographic obliteration often without clinical symptomatology,” Dr. Lanzino said. “This happens because the vessel goes on to occlusion if there is enough collateral circulation.”

Flow diverters are such a new area, Ryan McTaggart, MD, of Brown University (Providence, RI), told Neurovascular Exchange in a telephone interview, that studies like this one offer valuable insight.

In the United States, flow-diverter use is limited by the specific indications currently approved by the Food and Drug Administration. Dr. McTaggart said. But in fact, he reported, up to 50% of aneurysms are potentially eligible for treatment with flow diverters. Unlike clipping and coiling, he said, the treatment is “not just fixing the pothole but repaving the whole road.”

Currently, Dr. Lanzino pointed out, the decision to use flow diverters over clipping and coiling is based not on clinical factors or evidence but on personal preference, which is not ideal. Determining which is the best option remains a “moving target,” said Dr. McTaggart, because proceduralists are contining to gain experience with flow diverters, and the devices themselves continue to evolve, becoming safer and easier to use. “We must proceed with caution and be judicious in whom we select and how fast we move,” he said.

- Dr. Lanzino reports being a consultant for Covidien and Medtronic