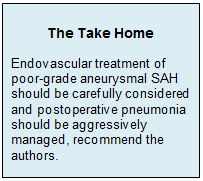 Details of the models, which were developed through multivariate analysis of a multicenter registry, were published online July 1, 2016, ahead of print in the Journal of Neurosurgery.

Ming Zhong, MD, of the First Affiliated Hospital of Wenzhou Medical University (Wenzhou, China), and colleagues used results from AMPAS (A Multicenter Poor-grade Aneurysm Study (AMPAS) to develop their models. Overall, 366 patients were enrolled in the registry between October 2010 and March 2012. Among them, 136 received endovascular treatment and were included in the present analysis.

Multivariate analysis revealed that a preoperative model taking into account World Federation of Neurosurgical Societies (WFNS) grade V, modified Fisher grade, and aneurysmal neck size has excellent discrimination for outcome, with an area under the curve (AUC) of 0.86 (table 1).

A postoperative model using the same variables also produced excellent discrimination, with an AUC of 0.86 that improved to 0.87 with the addition of postoperative pneumonia (table 2). 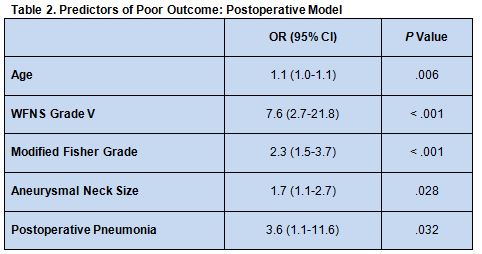 Both models had good calibration, at P = .941 and P = .653, respectively. However, as noted in a box within the paper, their false-positive rates were approximately 25%.

First Multicenter Study of Its Kind

“To the best of our knowledge, this is the first study focused on predictors of poor outcome after endovascular treatment of poor-grade SAH using a multicenter prospective study,” write the authors. “However, our study has some limitations.” These include the fact that patients were carefully selected for endovascular therapy by a multidisciplinary team, perhaps skewing toward better outcomes. Also, most patients were treated within 72 hours, so the findings offer no guidance on the relative benefits of early vs delayed treatment.

Additionally, the authors were unable to determine an optimal cutoff value for neck size in wide-neck aneurysms, nor were they able to look into alternative repair strategies. Finally, long-term imaging data were not available.

“Further improvement of endovascular treatment of ruptured wide-neck aneurysms may help improve outcome after poor-grade [aneurysmal] SAH,” conclude the authors. “However, endovascular coiling should be carefully considered in patients with poor-grade [aneurysmal] SAH and wide-neck aneurysms, and pneumonia should be aggressively managed to improve patient outcome.”