- Mortality and readmission rates similar for both, but longer hospital stay and more discharge to rehabilitation seen with clipping

Among elderly patients treated for unruptured cerebral aneurysms, clipping and coiling offer similar rates of readmission as well as of short- and long-term mortality, but clipping is associated with a higher rate of discharge to a rehabilitation facility and a longer length of stay. The findings were published online May 20, 2016, ahead of print in the Journal of Neurosurgery. 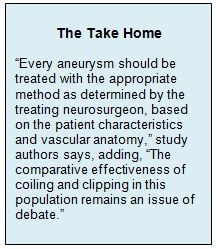 “Propensity score stratification and [inverse probability weighting] were used to adjust our analyses for known confounders,” explained Dr. Bekelis in an email to Neurovascular Exchange. “The possibility of clustering, which can bias the results of multicenter national studies, was accounted for by using mixed effects methods. Most importantly, an [instrumental variable] analysis was used to control for unknown confounders and simulate the effects of randomization on treatment.”

Overall, 8,705 patients underwent treatment for unruptured cerebral aneurysms during the study period and met inclusion criteria. Of these, 2,585 (29.7%) had surgical clipping and 6,120 (70.3%) endovascular coiling.

There were no differences between the 2 therapies with regard to 30-day or 1-year postoperative mortality or the 90-day readmission rate. Clipping was associated, however, with a greater likelihood of discharge to rehabilitation and a longer length of stay (table 1) 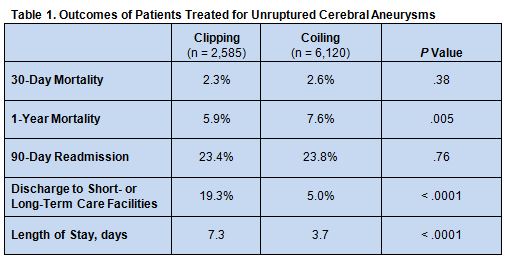 “Our study purposefully addresses many of the methodological limitations of prior studies,” explained Dr. Bekelis. “First, we created a cohort of almost all elderly patients in the US, giving a true picture of national practice. Second, we used advanced observational techniques to control for confounding.” Instrumental variable analysis, for instance, helped balance out the fact that both aneurysm size and location influence treatment selection.

“In contrast to all prior studies, which lacked long-term survival results,” he continued, “we modeled our primary outcome as 1-year mortality to mimic the end point of ISAT. To identify the longitudinal effect of the treatment of unruptured aneurysms on outcomes, we also used time- to-event analyses.”

Dr. Bekelis explained that confirming these findings with a randomized trial would be problematic. “Our power analysis and the size of our study have demonstrated that attempting to identify a small mortality difference between the two techniques would [require an] impractically large [trial],” he said. “Alternatively, this question can be answered by the creation of large, long-term registries, and such efforts are underway.”

According to Dr. Bekelis, “Every aneurysm should be treated with the appropriate method as determined by the treating neurosurgeon, based on the patient characteristics and vascular anatomy.

“In recent years, the pendulum has swung dramatically in favor of coiling for unruptured aneurysms,” he acknowledged. “However, the comparative effectiveness of coiling and clipping in this population remains an issue of debate.”