-  Lesion patterns differs, but lesion load low and usually silent in both groups

Among patients who undergo microvascular clipping or endovascular coiling of unruptured aneurysms, diffusion-weighted imaging (DWI) reveals a similarly low lesion load in each group. The frequency of each lesion type, however, differs by treatment approach, according to findings published online May 20, 2016, ahead of print in the Journal of Neurosurgery. 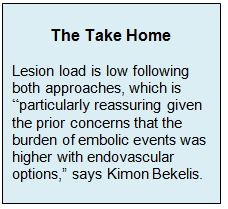 Johannes Platz, MD, and colleagues at University Hospital Frankfurt, Goethe-University (Frankfurt, Germany) used DWI to evaluate lesion patterns in 99 patients who were treated for unruptured intracranial aneurysms using microsurgical clipping (n = 62) or endovascular coiling (n = 37). The choice of therapy was determined based on interdisciplinary consensus, and patients underwent DWI 1 day before and 1 day after treatment.

While most baseline characteristics did not differ between the 2 groups, aneurysms treated by coiling were more likely to be located in the posterior circulation (P < .001).

The proportion of patients with new lesions detected on DWI following treatment was similar regardless of whether patients underwent clipping or coiling (43.5% and 54.1%, respectively, P = .311).

Lesions were categorized into 1 of 4 groups:

The patterns of lesions detected by DWI varied significantly between groups (P < .001), with the first two categories of microembolic lesions occurring more frequently after coiling and the latter two categories being more common after clipping (table 1).

During a clinical examination at 6 months, no procedure-related unfavorable outcomes were detected and all but 1 patient in each treatment group had achieved an mRS score of 0-2.

In an email to Neurovascular Exchange, Kimon Bekelis, MD, of Dartmouth-Hitchcock Medical Center (Lebanon, NH), explained that the lesion categorizations used in this study have also been employed in previous research. Should they be found to have clinical significance, it would be relatively easy, he said, to identify such lesion patterns in the clinical setting as well.

Both Dr. Bekelis and the study authors emphasize, however, that the most important findings of this study are that DWI lesion load is low for both groups and these lesions are usually clinically silent. These results are “particularly reassuring given the prior concerns that the burden of embolic events was higher with endovascular options,” said Dr. Bekelis.