Appearance of the white-collar sign (WCS), a thick neointimal tissue band at the aneurysm neck, predicts better outcomes after endovascular coil embolization of cerebral aneurysms, according to research published online May 13, 2016, ahead of print in the Journal of Neurosurgery. The study authors suggest that the presence of WCS could be useful for prognostic assessment. 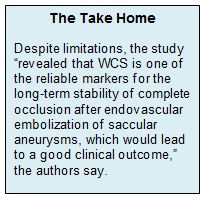 Toshio Higashi, MD, of Fukuoka University (Fukuoka, Japan), and colleagues evaluated the prognostic importance of the presence of WCS in 140 patients with 149 aneurysms in which it was possible to evaluate the aneurysm neck with conventional angiography.

After multivariate adjustment, there was an inverse relationship between neck size and the likelihood of finding WCS (OR 0.38; 95% CI 0.18-0.79). Other factors, including age, sex, aneurysm location, type of aneurysm, rupture status, initial embolization status, packing density, coil variety, and stent use, did not differ between patients with WCS and those without.

Overall, 43 aneurysms were excluded from the analysis because they were treated with a stent-assisted technique. In the remaining 106, WCS was associated with a higher rate of complete occlusion (100% vs 61.4%; P = .001) through a mean follow-up of 31 months. There was no rupture or major recanalization in the WCS group.

The authors explain that in patients with WCS “the neointimal thickening would be promoted at the neck of these coiled aneurysms, which prevents any further aneurysmal filling.”

“Our study also demonstrated that the outcome of treated aneurysms with WCS was excellent in the follow-up period,” they add, concluding that “WCS would be a good predictor of radiological and clinical outcome.”

They acknowledge some limitations of their study, however, including the retrospective design, the relatively small average aneurysm size (5.7 mm), and the exclusion of cases with stent treatment from the analysis of radiological outcome because of the possibility of stent artifact on MR angiography.

“Despite these limitations, this study focused on the role of WCS and revealed that WCS is one of the reliable markers for the long-term stability of complete occlusion after endovascular embolization of saccular aneurysms, which would lead to a good clinical outcome,” they write. “In the future, a large prospective study will be necessary to confirm the clinical importance of WCS.”