Over the long-term, Medicare expenditures are higher for surgical clipping than for endovascular coiling of aneurysmal subarachnoid hemorrhage, according to an analysis published online May 20, 2016, ahead of print in the Journal of Neurosurgery. 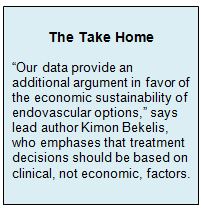 While these data can help inform policy makers, payers, and administrators, the study’s lead author emphasized to Neurovascular Exchange that the decision to clip vs coil should be made based on clinical—not economic—factors.

“Our study addresses many of the methodological limitations of prior studies,” Dr. Bekelis explained in an email. By creating a cohort of nearly all elderly patients in the United States, it gives a “true picture of national practice in this age group,” he said. And while the “prior selection of patients for either procedure (based on their different neurological statuses and characteristics) will undoubtedly bias the outcomes, and thus the comparative cost of the 2 procedures,” Dr. Bekelis acknowledged, the study’s use of “instrumental variable analysis to account for such bias . . . simulates the effect of randomization on treatment by controlling for unknown confounders (ie, neurological status at presentation, aneurysm size, and location).”

By using a time horizon of 1 year, the researchers were able to include costs related to possible future reinterventions and the cost of long-term care related to complications, he added. Finally, the “cost calculations were based on exact Medicare expenditures for each patient over time,” Dr. Bekelis pointed out. “This accurately reflected the true financial impact of those procedures, contrary to prior investigations focusing on charges or estimates.”

During the study period, 3,210 patients underwent treatment for ruptured cerebral aneurysms and met the inclusion criteria. Of these patients, 1,206 (37.6%) had surgical clipping and 2,004 (62.4%) had endovascular coiling.

Median total Medicare expenditures during the first year after admission for aneurysmal subarachnoid hemorrhage were $113,000 for surgical clipping and $103,000 for endovascular coiling. After adjusting for confounders, however, clipping was associated with significantly higher spending than coiling. The estimated difference was greatest when using instrumental variable analysis, the technique meant mimic randomization (table 1).

“Endovascular options are increasingly becoming technologically sophisticated and are associated with rising device costs,” said Dr. Bekelis. “Concerns have been raised that this cost outweighs the cost of clipping, which involves less expensive implants. However, our study did not confirm these concerns and demonstrated an opposite relationship of expenditures and procedures.”

Importantly, the analysis “addresses a common misconception that endovascular interventions are more costly,” he noted, adding, “Our data provide an additional argument in favor of the economic sustainability of endovascular options, which can be used in the debate with policy makers, payers, and administrators as new treatments that can benefit neurosurgical patients are introduced.

Dr. Bekelis emphasized that decision making should be based on aneurysm morphology and patient comorbidity profile, not cost. Also, he noted, “this data will need to be reproduced in the younger population and in the commercially insured.”