A study investigating 1-year outcomes among patients with anterior circulation aneurysms treated with the Pipeline embolization device identified multiple factors associated with treatment failure. The findings were published online May 6, 2016, ahead of print in the Journal of Neurosurgery. 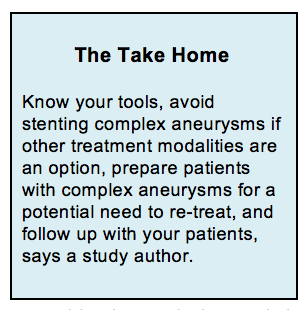 “Overall, the Pipeline does better for recanalization than previous methods, but it’s not perfect, so our focus is on the 15% to 20% who anatomically do not progress to full occlusion,” study author Maksim Shapiro, MD, of NYU Langone Medical Center (New York, NY), told WLNCMD in a telephone interview.

He and his colleagues looked at data on 92 patients who underwent follow-up angiography 1 year after being treated with the Pipeline device (Medtronic).

Further examination of individual cases identified device malapposition, inadequate aneurysm coverage, incorporation of branch vessels into the aneurysm fundus, impaired implantation of the device in the presence of a formerly placed laser-cut stent, and evolving endoleak arising stemming from primary maldeployment of the device as potentially contributing to failed treatment.

It remains unclear how to deal with some of these more difficult-to-treat aneurysms, Dr. Shapiro said, although several suggestions for managing specific challenges are outlined in the study. Large aneurysms may require use of more than 1 Pipeline. If aneurysms have a complex geometry, there are strategies that may help improve occlusion rates. Dr. Shapiro suggests, however, that it might be wise to warn patients that full occlusion rates are lower with this type of aneurysm, and re-treatment may be necessary.

With regard to previously stented aneurysms, said Dr. Shapiro, avoidance of the problem in the first place is the best strategy. “The message we want to get out there is if there is a complex aneurysm, and there is a choice between treatment with a stent, a Pipeline, or another flow diverter, you really want to think hard about that stent because it closes doors on subsequent treatment,” he said.

Regarding the Pipeline device itself, Dr. Shapiro said there is room for improvement. In particular, it remains somewhat difficult to deploy, with a steep learning curve, so improvements to the delivery system (which have already occurred with Pipeline 2) are welcome.

“The device is a tool, and it is important to understand the tool,” he said. “People need to understand it more [to obtain better outcomes]. It’s not a magic wand. You have to have a deep appreciation for how it works, why it works, and why it doesn’t work.”

Another important aspect of patient care is good follow-up, said Dr. Shapiro. “In this case, 92 of 100 [patients] came back, and that’s high outside of a formal trial. If you really want to understand what your results are, you have to have your patients return.”