Endovascular repair is less costly over the long-term than clipping for the treatment of unruptured aneurysms, according to an analysis of Medicare patients published online March 24, 2016, ahead of print in the Journal of NeuroInterventional Surgery. 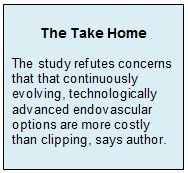 Kimon Bekelis, MD, of Dartmouth-Hitchcock Medical Center (Lebanon, NH), and colleagues compared the costs of surgical clipping and endovascular coiling for the treatment of unruptured cerebral aneurysms in 8,705 patients aged 65 or older. Data were obtained from Medicare fee-for-service claims made for between 2007 and 2012, and none of the patients had secondary insurance.

The investigators used multivariate regression analysis with mixed effects to account for clustering at the Hospital Referral Region level. They also used an instrumental variable (regional rates of endovascular treatment) analysis to control for unmeasured confounding by creating pseudo-randomization.

Median total Medicare expenditures in the first year after admission for the procedure were $46,800 (interquartile range [IQR] $31,000-$74,400) for surgical clipping and $48,100 (IQR $34,500-$73,900) for endovascular therapy. After adjustment for confounders, however, clipping was revealed to be the more expensive approach (table 1)

“This analysis provides an insight into the economic aspects of the available treatments for cerebral aneurysms,” Dr. Bekelis told WLNCMD in an email. “However, we are lacking the granularity to identify the exact components contributing to the total yearly cost of either procedure.” He speculated that the lower cost of endovascular repair is likely due to the lower rate of discharge to rehabilitation in that group.

In a telephone interview with WLNCMD, Lucien Maidan, MD, of the Dignity Health Neurological Institute (Sacramento, CA), said that the analysis would benefit from a comparison of complication rates, since that could help explain the cost difference between the 2 treatment approaches. He also pointed out that hospitalization, a contributor to cost, typically lasts several days longer after clipping compared with coiling.

According to Dr. Maidan, the study requires longer follow-up to confirm the findings. Another important contributor to the cost of coiling, he pointed out, is the need for repeat treatment up to 2 years after the initial procedure. It would also be interesting, he said, to compare the cost of open surgery with today’s more advanced endovascular techniques, such as stent-assisted coiling or use of the Pipeline device (ev3).

Dr. Bekelis emphasized that the data should not be used to make clinical decisions. Rather, selection of an open vs endovascular approach should be based on patients’ regional anatomy and comorbidities. Cost considerations are relevant for policy decision making by both payers and hospitals. “In an era of cost containment,” he said, “proving the cost-effectiveness of new interventions, such as endovascular interventions, is crucial.

These data refute concerns “that technologically advanced endovascular options carry a significant cost attributed to constantly evolving devices that outweigh the cost of clipping, which involves less expensive implants,” noted Dr. Bekelis. He acknowledged that more detailed analyses are required to determine where the cost savings emerge and to incorporate other important outcome measures, such as quality of life and patient satisfaction. Dr. Maidan pointed out that, from a patient perspective, coiling is generally preferred because patients are back on their feet much more quickly than after open brain surgery and the risks of neurological deficits are lower.