Second-Generation Pipeline Flex an Improvement on the Classic, Researchers Say

The second-generation Pipeline device, known as the Flex, improves upon the Classic design, offering greater ease of use and superior procedural outcomes. Details on its performance were published online March 9, 2016, ahead of print in the Journal of NeuroInterventional Surgery. 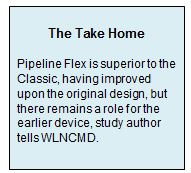 “Some of the frequently encountered issues during Pipeline Classic placement include difficulty freeing the distal end of the device from a constraining capture coil, limited pushability of the delivery wire, and inability to resheath the Pipeline after partial deployment,” Dr. Le told WLNCMD in an email.

“The second-generation Pipeline Flex contains a completely redesigned delivery system, while leaving the implantable device unchanged,” she explained. “The proximal portion of the flow diverter was placed on a resheathing pad to allow for recapture and repositioning of the device after partial deployment.

“Furthermore, the distal capture coil was replaced by 2 constraining Teflon [PTFE] sleeves, which allow for increased readiness of device opening and facilitation of stent resheathing by 180-degree rotation upon device recapture,” Dr. Le continued. “Finally, the pusher wire was exchanged for a larger, more robust laser-cut hypotube to enhance pushability of the device during delivery.” The new device is already in widespread use nationwide.

Both groups of patients were similar with respect to age, gender, and location of target aneurysms. Use of the Pipeline Flex was associated with decreased procedure and fluoroscopy time as well as reduced radiation exposure and contrast usage (table 1). All these factors remained significantly different between the 2 devices on multiple regression analysis.

Tips for Successful Use of Flex

While the redesigned Pipeline is an improvement, Dr. Le said, “there are occasionally cases where the distal stent does not open immediately, and the guidewire does not appear to be travelling as expected. If this occurs, the device may be recaptured with the microcatheter in order to evert the PTFE sleeves or place them underneath the device, which removes their potential contribution to non-expansion of the device.” She also recommended being careful when redeploying the device after resheathing as well as not doing resheathing too often because the leading edge will no longer be protected by the PTFE and may be damaged.

While the Flex device is considered to be a superior device to the Classic, Dr. Le mentioned there may be cases when the Pipeline Classic might be preferable, such as during treatment of distal vessels that may not be able to accommodate the PTFE sleeve or tolerate the further pushing of the delivery wire needed with the new device.