Aneurysms that recur or leak after being treated with endovascular coiling can safely and effectively be salvaged with clipping, according to new data published online February 19, 2016, ahead of print in the Journal of Neurosurgery. 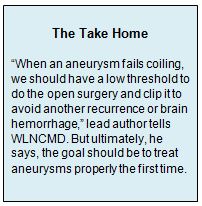 Given the technical challenges of repeat treatment, however, operators should strive to do the endovascular procedure right the first time around, Pascal Jabbour, MD, of Thomas Jefferson University Hospital (Philadelphia, PA), stressed to WLNCMD.

Jabbour and colleagues identified 111 patients with recurrent coiled aneurysms whose lesions were managed by surgical clipping at their center between January 2002 and October 2014. The mean patient age was 50.5 years, 74% were female, and the mean aneurysm size was 7 mm. All but 3 aneurysms were located in the anterior circulation.

Complete occlusion was achieved in 108 patients (97.3%). During a mean follow-up period of 22 months, 2 patients (1.8%) experienced a recurrence after clipping, and yet another retreatment was required in 5 of 111 (4.5%) after clipping.

Major postoperative complications resulting in neurological morbidity occurred in 8% of patients, and the mortality rate was 2.7%. Good clinical outcome, defined as an mRS score of 0-2, was achieved in 90% at their last follow-up visit.

“Sometimes the coils prevent the clip from closing, and we need to remove the coils in order to be able to clip,” Dr. Jabbour told WLNCMD in a telephone interview. “We found that we rarely had to do this maneuver, which is dangerous.” Indeed, all 3 patients who did require coil extraction experienced a postoperative stroke.

“If you coil it and it recurs or you don’t coil it completely, we can salvage it,” said Dr. Jabbour. “So, when an aneurysm fails coiling, we should have a low threshold to do the open surgery and clip it to avoid another recurrence or brain hemorrhage.” But the ultimate goal, he said, should be to treat it correctly the first time because salvage clipping remains a technical challenge, especially if the aneurysm is also stented.

“There are only a few neurosurgeons in the country who are dually trained, who can do either clipping or coiling,” he reported. Interventional radiologists who are only trained for coiling may have a tendency to favor this procedure, while neurosurgeons trained only in open surgery may be more partial to clipping as a treatment modality. But the decision to clip or coil should be based on features of the patient and aneurysm, not the preferences or training of the operator, Dr. Jabbour emphasized.

The findings should not be construed as an argument for more endovascular coiling, he noted. “My goal from this paper is not to encourage people to coil because there are some aneurysms that don’t meet the criteria for coiling, and they need to be clipped from the beginning,” Dr. Jabbour explained. “In some cases [from this series] the aneurysms should have been clipped from the beginning.”

“Before treating an aneurysm, weigh the risks and benefits of each technique,” recommended Dr. Jabbour. “If you think that coiling would only partially treat this aneurysm, why not clip it and not coil it?

Ultimately, he said, clear-cut protocols that delineate which aneurysms should be coiled and which should be clipped are needed.