- Similar outcomes with both but more complications with intensive approach

Intensive blood pressure lowering does not reduce the risks of death or disability compared with the standard approach in patients with intracerebral hemorrage, according to results of the randomized ATACH-2 trial published September 15, 2016, in the New England Journal of Medicine. 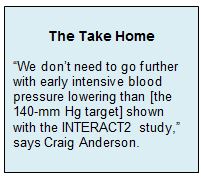 Findings from ATACH-2 were previously released at the European Stroke Organisation Conference meeting this May.

An outside expert commenting on ATACH-2 for Neurovascular Exchange, however, warned against interpreting this study to mean that blood pressure lowering is useless in this clinical context. Rather, it shows that lowering beyond currently recommended guideline levels is probably not necessary.

For ATACH-2, Adnan I. Qureshi, MD, of the University of Minnesota (Minneapolis, MN) and colleagues randomized 1,000 patients with intracerebral hemorrhage < 60 cm3 in volume and a Glasgow Coma Scale (GCS) score ≥ 5 to a systolic blood pressure target of 110-139 mm Hg (intensive treatment) or 140-179 mm Hg (standard treatment). Blood pressure was lowered using IV nicardipine, which was administered within 4.5 hours after symptom onset.

The primary outcome of death or disability (defined as an mRS score 4-6) at 3 months following randomization and after adjusting for for age, initial GCS score, and presence or absence of intraventricular hemorrhage occured in a similar proportion of patients in each group. The rate of serious adverse events considered to be related to treatment and occurring within 72 hours after randomization was also similar for both groups. On the other hand, the intensive treatment group experienced more serious adverse events within 3 months and more renal adverse events within 7 days (table 1).

After a prespecified interim analysis, enrollment in the trial was stopped because of futility.

At least two-thirds of patients with intracerebral hemorrage have an acute hypertensive response, Craig Anderson, MD, PhD, of the George Institute for Global Health (Sydney, Australia), told Neurovascular Exchange in an email. “Studies are consistent in indicating a strong positive association between increasing blood pressure and poor outcomes of death and disability,” he noted.

INTERACT2, published in 2013, “indicated that lowering of elevated systolic blood pressure to a target of 140 mm Hg within 1 hour improved chances of recovery,” said Dr. Anderson, who was principal investigator of that trial. “However, this is only one trial, and it did not provide definitive evidence, leaving questions as to the real benefits of blood pressure control in this serious condition.”

More definitive evidence is needed, both physicians said, particularly in light of the overall lack of consistency in the management of blood pressure among patients with intracerebral hemorrhage, which ranges from aggressive control using IV agents to no control at all, unless blood pressure is very elevated. The most common paradigm today, Dr. Qureshi noted, is to maintain a systolic blood pressure < 180 mm Hg, which is a full 40 mm Hg higher than the 140-mm Hg target found to be optimal in INTERACT2.

ATACH-2 “suggests that very early, rapid, and very intensive control of elevated blood pressure does not improve outcome and provides potential harms and unnecessary effort,” said Dr. Anderson. But, on the other hand, it does not indicate that lowering blood pressure as per current guidelines, based on the INTERACT2 trial, is useless, he stressed. “There is no doubt that this paper has added some confusion to the evidence. [But] I believe it adds, rather than goes against, INTERACT2 results in showing that we don’t need to go further with early intensive blood pressure lowering than what has been shown with the INTERACT2 study.”

According to Dr. Qureshi, the results of this latest trial “should homogenize the management to at least some degree across institutions. Clinicians will be more aware of the clinical benefit (or lack of) when choosing a particular strategy for systolic blood pressure treatment in patients with intracerebral hemorrhage.”